No everything is fantastical around here of late...  I picked up some of the Ukrainian Civil War figures from Footsore USA last month.  These appear to be done by the same sculptor who did the 1st Chechen War minis I picked up in a Kickstarter last year, so I thought they would work well to add to the irregular fighters for my post-Cold War collection.  I like the overall detail on these figures, and they have enough mid-level tech and field gear to not look too out of place for  games set in the late 90's to early 2000's.

I am actually rather surprised how hard it is to actually find Cold War era sculpts in 28mm given the recent surge in "cold war gone hot" rule systems of late.   I can find plenty of US minis for Viet Nam and the wars in Iraq and Afghanistan, but US Army Europe 1980-1990 is a little spare.
For these models I am working on using a mix of camouflage types.  The soldier with the LMG is my first attempt at doing a police style "urban blue" camouflage pattern that seemed to gain popularity over the last 20 years.  The bases are plastic "ruined factory" inserts I picked up from Miniature Market awhile back.
Joining these three are the last miniatures from the afore mentioned Tiny Terrain Models Kickstarter. 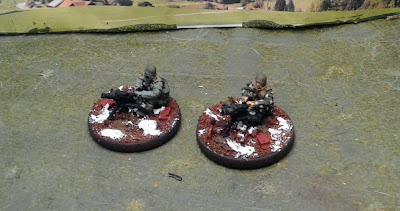 These are two AGS-17 AGL operators.  The one on the left is a clumsy attempt to add some MOPP gear to provide added support to my USSR CBRN platoon.  I am less than happy with the overall effect, but it will do until I can find an appropriate head swap (or get back into the swing of sculpting).
Expanding the collection even further are this Mark 19 Grenade Launcher and Milan ATGM launcher from Eureka miniatures.  I have been sitting on these for awhile, so I thought I could at least add them as objectives or augments for the Cold War project.  The Milan could substitute rather easily for a Spigot or other more modern Soviet ATGM. 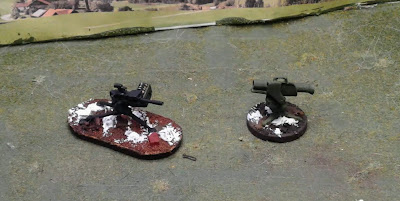 I also picked up some 3D printed armor models off of Etsy to see if they would work for the collection.  I opted for a BRDM-2 scout car and BMP-1 IFV.  Due to a mix-up I received a BMP-2 instead, but I figured I would add it to the collection as well.

Note this is just the base coating with some light weathering on the edges.  I fully intend to rust them up a little more and add some mud, baggage and camo-netting to make them a little more 'lived in.'

With all the post-apocalyptic and modern models I have been doing of late, I decided to add some better scatter terrain to the collection as well.  These resin cast wrecked vehicles are from Armorcast.  I took my inspiration from my own experiences in Southwest Asia and opted for the ubiquitous  white Toyota Hilux w/ red racing stripe, and a cab.  I think the car is actually a Soviet era Lada, but I figured making it look like a white opel Taxi Cab would also work.  I went a little overboard with the weathering, but wanted to try several different techniques. 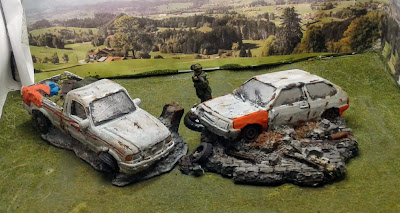 The third wreck is a 'wrecked import' that looks a little too nice to fit in on most of the tables I have envisioned.  That said, its wrecked, so why not. 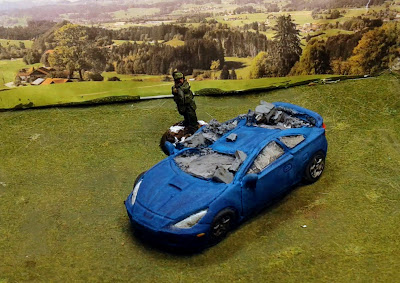 Finally, I picked up some "Nuclear Adventurers" from Brother Vinni that were apparently inspired by games like S.T.A.L.K.E.R or Metro 2033. 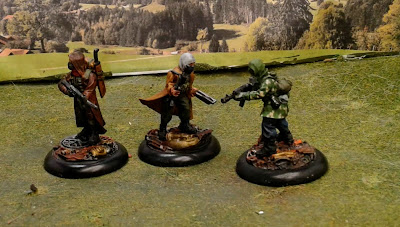 I picked up a copy of Zona Alfa awhile back, and found the rules to be rather interesting.  The setting (a scifi themed Chernobyl exclusion zone) fits in well with the the Chechnya project I am working on, I figured three figs was a small risk.  They will fit in with the Chechens in a pinch, so why not? 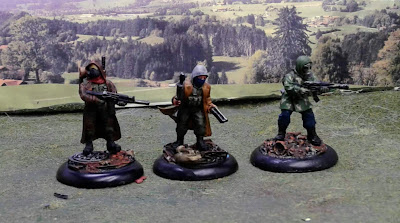 A large mix of companies represented with this update, but since I am getting rather bad at internet-ing of late, it will have to do.  Thanks for looking.