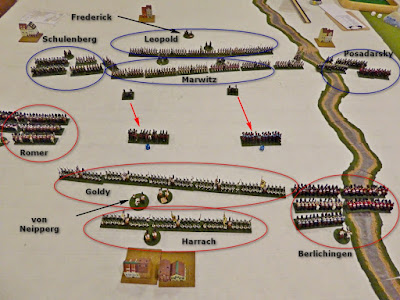 In preparing for battle I have always found that plans are useless, but planning is indispensable.   -Dwight D. Eisenhower


Now that the battle results are published, how did the plan work out?  Better than expected.  In my threat analysis I had not anticipated the Austrians ordering a general attack against my incoming forces.  This allowed me to receive the Austrian attack on my flanks and prevent them from supporting the weak Austrian infantry.  I was thus able to retain three of my seven Cavalry regiments and meet my overall goal of retaining freedom of maneuver for follow on operations.

My biggest challenge was getting my Cavalry to do anything.  The poor commanders had a 1 in 3 change of failing to advance each activation.  I was able to turn this into a positive by withdrawing them along the flanks, forcing the Austrian Cavalry to cross within range of the infantry in order to close.

Let's break this down into some visuals.

Lets start with the array of forces 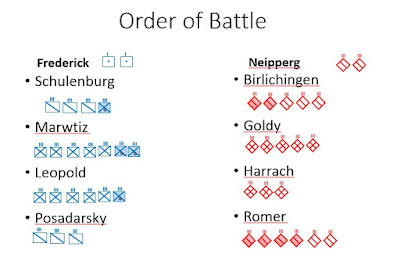 The advantage of doing the array of forces is the ability to rapidly assess the balance between the two sides.  One item I noted doing this sheet after the battle, however, is that Romer's brigade has been shorted one of its four Curassier (Superior) regiments.  I am not sure if that is enough for a tipping point, but it lessens the punching ability of the main Austrian striking force.

Here is the set-up photo from the top of the page, translated into functional graphics.  I enjoy reading my opponent's battle reports because it gives me a window into how both sides interpret the same situation. 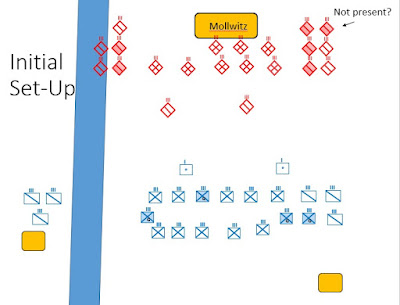 In the opening of the game, the Austrian Cavalry advanced as expected.  Along with the unexpected advance from the Austrian Infantry.  This immediately placed me on defensive footing as advancing to far on my part would prevent me from isolating and destroying the Austrian commands.  My own cavalry refused to follow orders, so I was forced to use them to draw the Austrian Cavalry in rather than spread them out. This resulted in a tight traffic jam of forces on the Prussian right, that would require several turns to get the commands straightened out and ready for the attack.  Frederick and von Schwerin both used their influence with Marwitz and Leopold to move with alacrity, which helped get some of the critical double move results necessary to get the forces aligned correctly. 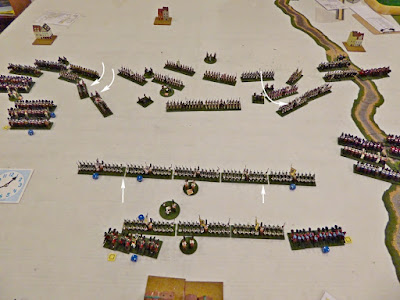 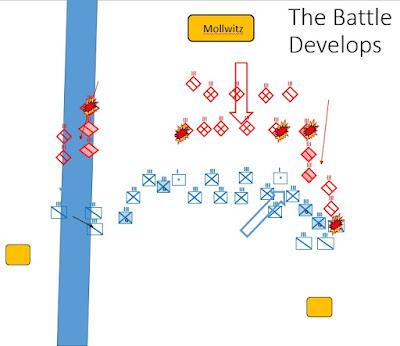 In the following turns, the affects of the Prussian Artillery and small arms really started to tell.  The Austrian cavalry was able to focus on selected units for complete destruction.  The Prussians, however, were able to stack damage on multiple regiments.  The acted to protect the cavalry as they fell back on the flanks.  Austrian units had their momentum blunted by fire and then had to take time to recover their disorder. The result was a general rise in the level of disorder across the Austrian army that would culminate in the next phase. 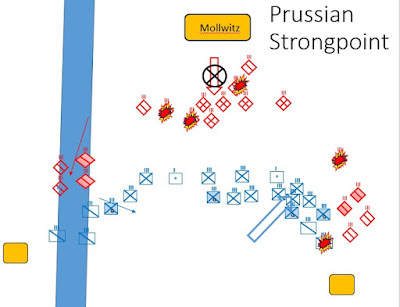 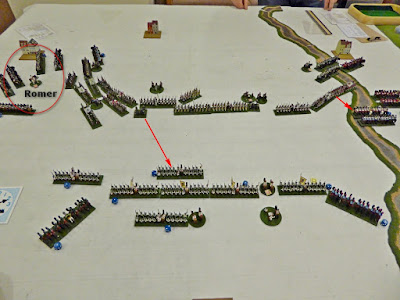 Frederick's evacuation from the battlefield coincided with the establishment of the Prussian strong-point in the the center.  Marwitz established his blocking position to cover Posadarsky's retreat, inflicting damage on the Austrian right and dissuading any action against the Prussian heavy guns. Leopold was able to tie-in with Schulenberg on the right to create a layered defense and multiple fire sacks to trap the Austrian Curassiers.  The advancing Austrian infantry did represent a threat as they could potentially break a Prussian infantry regiment and disorder the line.  This could create the gap the Austrian cavalry needed to make their attack. 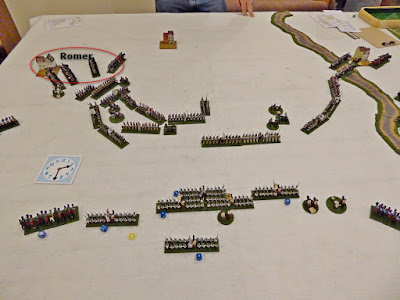 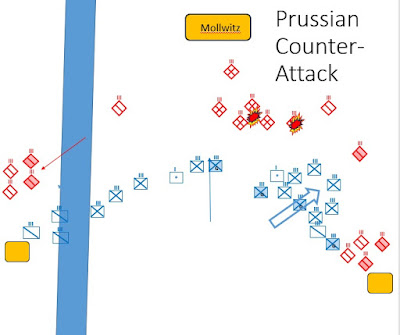 The answer of course, in the finest German military tradition was to launch a counter attack. Marwitz advanced to the Northwest to bring the Austrian cavalry and infantry under fire, while Leopold executed a similar maneuver to the Northeast.  This attack broke up the Austrian advance, shattering Goldy's command.  The resulting breathing space allowed the Prussians to establish a strong defensive loop to prevent the Austrian cavalry from turning a flank. 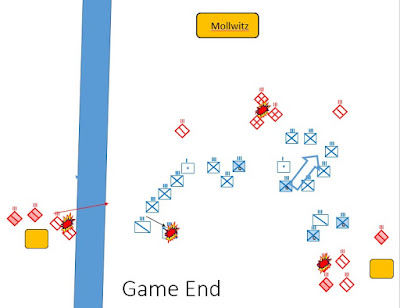 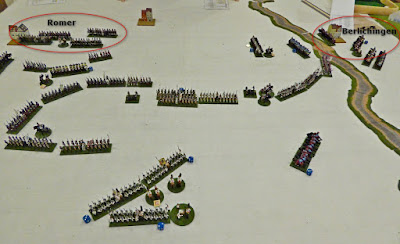 Marwitz then pulled his command back into position to guard the Prussian left, as Leopold lined up seven regiments to face Romer's diminished command.  The Austrian infantry was no longer able to present a viable defense of the objective and the game was called.

My greatest advantage over my historical counter-part is my knowledge of the actual capabilities of my own leaders, their formations and those of my enemies.  I developed a plan based on the knowledge that I had inferior cavalry, but that the Austrian infantry could not mount a credible threat.  Thus I was focused on defeating the Austrian cavalry, while giving short shrift to the infantry.  This might have been an issue mid-way through the game, but the presence of the Prussian artillery ensured that the Austrian musketeers would be suitably punished for their adventurism.

Having played both sides, I still think the Austrians have little hope for success baring exceptional dive rolling.  The lack of Artillery and ranged fire, mean that the Prussians are able to dictate the course of the battle.  The cavalry is powerful, but is hard pressed to come to grips without being badly mauled by muskets and canon fire.  I would be interested in trying some variations on the game like using standard infantry on the Austrian side, or a couple of artillery batteries to limit the Prussian freedom of maneuver.  Perhaps even removing the terrain conditions to see what improved movement rates could do.

Overall it was an interesting study and I look forward to the next outing. My thanks to Jon for the scenario, hospitality and enjoyable gaming experience.