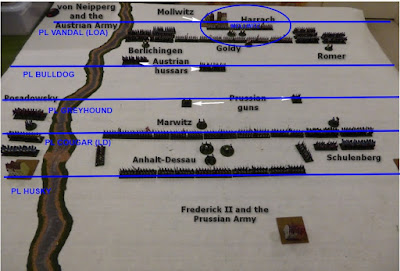 Carrying on one of my projects from last year, I want to continue with my series on using operational design methods in designing wargames scenarios and games.  The prelude to my project started with an in-depth analysis of Jon's Montebello 1859 scenario from the 2nd War of Italian Independence, and included my thoughts and analysis of our multiple iterations of the game.  We took a similar approach to several games using his Kolin 1757 scenario, but I didn't take the time to do the same in-depth approach.  Important note:  I am a nerd who is doing this for personal entertainment.  Do not take anything here to be a purely doctrinal approach! This is an MDMP-like presentation and anyone trained at Leavenworth should be prepared for an apoplectic aneurysm if you read further....

My goal with these types if post is twofold:  1) To better understand why the conflict turned out the way it did in history and 2) to evaluate if the game/scenario will provide a reasonable outcome within that historical context.  One of the reasons I have enjoyed gaming with Jon over the years is that he shares in interest in basing games off historical scenarios rather than always relying on point buys and one-off games.  That means that games tend to be inherently unbalanced based on the historical decisions leading up to the battle.  Thus victory does not always mean winning as much as it might "not losing as badly as the Austrians did in reality"

Following our first iteration of the Battle of Mollwitz, where I led the Austrians to ignominious defeat, it was agreed that we would switch sides and try the battle again at a later date.  I decided to break the scenario down from an operational stand point from both perspectives to develop a plan of action for the Prussians.

Jon has already provided a detailed account of the battle on his website, as well as his set-up for the scenario.  There is also an excellent overview of the historical engagement available at the Obscure Battles blog.   Thus I will only comment on the part I played. 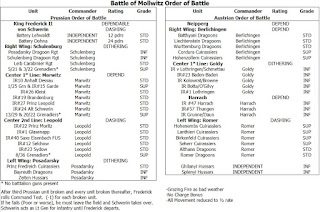 My overall concept was to focus on the destruction of the Prussian cavalry while trying to prevent the Prussian Infantry from engaging my infantry.  My goal was to destroy the Prussian wings and then sow enough confusion and discord to halt  their advance.  Something like this: 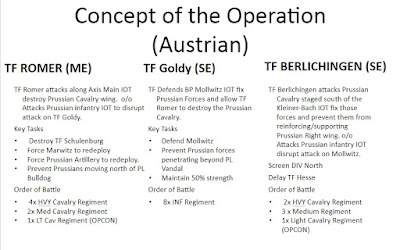 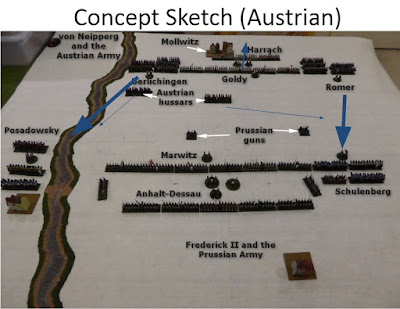 For his part, my opponent seemed focused on an infantry assault on Mollwitz itself.  My interpretation of his objectives were: 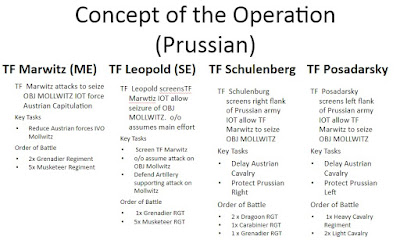 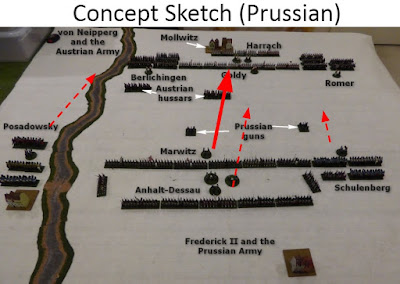 So what happened?  The Austrian cavalry on both sides succeeded in destroying/driving off the Prussian Cavalry. Both elements then turned inward to attack the rear of the Prussian Infantry. The cavalry was unable to catch to the Prussian infantry before it was able to launch an attack by fire against the Austrian infantry. Austrian infantry forces were routed, and the game was called.  Technically it was an draw based on units destroyed, however the complete destruction of the Austrian Infantry left them unable to claim ownership of the battlefield.  The loss of the entire Prussian cavalry force likewise stripped them of their mobility and eyes, while leaving their lines of communication wide open for exploitation.  I will need to seek a more decisive outcome for the next outing!

Lessons Learned -
So on to the second attempt! December 29th January 12th!

My goal for the Prussian side is to defeat the Austrian Army without losing all of my cavalry in the process.  Hopefully this will provide a more decisive outcome.  Thus I came up with an initial framing question:

How can the Prussian army defeat the Austrian army while still maintaining enough cavalry for reconnaissance and rear security following the battle?

A simple mission statement based on King Frederick's stated objectives

The Prussian army attacks OBJ Mollwitz 101300APR1741 IOT defeat the Austrian Army and compel them to sue for peace in the current conflict.

A few facts and assumptions

Terrain Analysis:  The battle is essentially being fought on open ground.  The snow limits the affect of artillery (no over penetration) and severely restricts movement.  The fixed artillery positions will create a choke point that will hinder movement through the center of the battlefield.  The lack of elevated terrain also means that he artillery will be masked as soon as the Prussian Infantry advances past it.

Enemy Most Likely Course of Action:  The Austrians will take advantage of their superior cavalry/mobility to destroy the Prussian wing cavalry and then attack the flanks to prevent the Prussians from engaging the Austrian Infantry.

Enemy Most Dangerous Course of Action:  The Austrian Cavalry will be able to get into the Prussian rear area rapidly and destroy several infantry regiments.  This will force the Prussians to re-deploy and potentially keep them from advancing on Mollwitz.

Austrian COG: The Austrian Center of Gravity is the powerful striking force under Romer on the Left flank. The combination of four superior curassier regiments and a dashing leader mean that it has the greatest potential to damage Prussian efforts. Destruction of TF Romer will allow freedom of maneuver to the Prussian army and the destruction of the weak infantry formations defending Mollwitz.

Prussian Commander’s Intent: I intend to draw the Austrian Army out of position and defeat them in detail. We will focus on the destruction of the Austrian cavalry threatening our flanks. Once the threat to our flanks is reduced, we will take Mollwitz by a Coup de Main with our infantry forces.

Concept of the Operation: This operation will be conducted in three phases. In phase one TF Marwitz will advance to PL Bulldog to protect the artillery. TF Leopold will move to the Right flank and engage TF Romer. TF Posadarsky and Schulenburg will conduct a feint to draw the Austrian Cavalry in the infantry’s engagement areas.  Phase two is the destruction of the Austrian Cavalry under Romer.  TF Leopold will attack the Austrians by fire. TF Schulenburg will avoid engagement with full strength Cavalry formations, but instead focus on picking off damaged units and preventing reinforcement.  TF Marwitz and Posadarsky will guard Leopolds flank to hold the remaining Austrian forces outside the engagement area. Phase three begins after the destruction of TF Romer, TF Marwitz, supported by TF Leopold will attack the Austrian Infantry in Mollwitz. 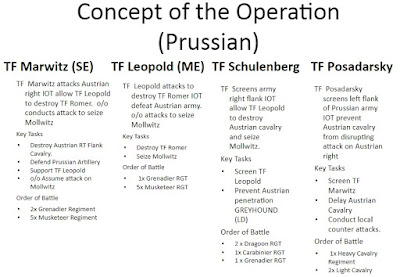 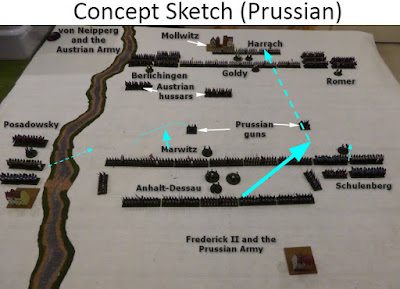 O.k.  so there is the plan.  How will this work out?  Well we actually fought the engagement last week, but Jonathon's roll as host (and picture taker) means he will need to provide his interpretation of events first.