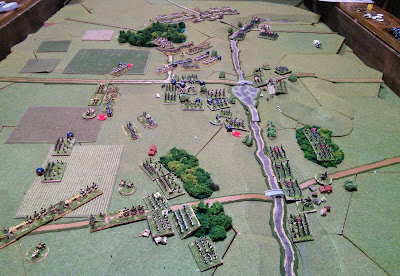 Now that the Saxon's are complete, I felt the urge to give them some time on the table.  I wanted to try out the Battle of Raszyn scenario from Peter's Blunders on the Danube for some time now.  It seems ideal for a solo game as it maintains a relatively static defense, with a fairly tough defensive position in the center.  I also referenced some other sources that provided a detailed analysis of the battle as well as the battlefield itself.  Overall, there seems to be quite a bit of disagreement over the actual strength and distribution of forces on both sides.  Peter's map similarly abstracts the overall battlefield to provide the right feel without necessarily being an accurate depiction of the terrain.  (At this point, if you just want to see the battle itself skip down to the next set of images...)

The biggest challenge to me with this scenario stems from the basic problem with all tabletop wargames:  I know too much.  One of the recurring themes in my reading was the effect of the terrain and disposition on the belligerent's understanding of the battle.  Consider the following:

"Prince Poniatowski planned to leave Raszyn and move against the Austrians. However, General Rozniecki, the commander of Polish cavalry, informed him that the enemy is quite strong. "

So after watching the Austrian advance guard cavalry brush back the screening Polish cavalry (2nd Uhlans), Ferdinand d’Este could finally see the entire [Duchy of Warsaw] army deployed before him, positioned along the Mwora (Rawka) stream line and forward Falenty village.


"Surprised at finding the entire army before him, he (the Austrian commander) decided to attack immediately with his main effort at Jaworow on the shortest route to Warsaw. Confounded by difficult terrain and Polish bullets, however, the main attack soon dissolved into a time-consuming search for bridging materials and the battle came to focus on the action in the centre." (Gill - "With Eagles to Glory" p 282)


Knowing the scenario (and the historical outcome) as well as having an overhead view of the battlefield leads to distinctly a-historical methods of play.  In this battle, it would be easy to mass all of the Austrian forces against the weak Polish 2nd Brigade on the Austrian left.  I can see their deployment  and relative isolation.  I also know that they have the weakest leader and generally lowest quality troops.  Historically, the initial thrust was at Jaworow on the Austrian Right, but they discovered too late that the Poles had pulled up all of the planks on the bridge.  Some Austrian troops were able to cross on a foot bridge further East, but the Austrians were never able to cross in force.  The result was that the focus of the battle became the Austrian assault against the Polish Strong point in the center.  This was arguably the worst possible location to attack based on the Polish disposition, but it was forced based on the Austrians limited understanding of the battlefield.

I will save further commentary for a later update, as it is a fundamental issue that impacts every attempt at replicating a historical battle in miniature.

For this battle, I opted to "Guide" the plan in the historical direction by using Peter's suggested initial array of forces: 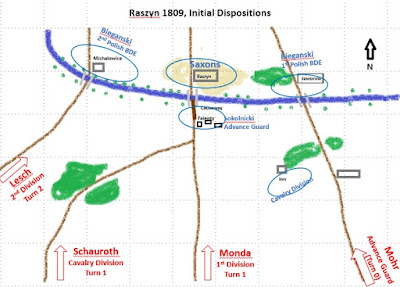 I decided to use Honours of War for this scenario, even though it is meant for the Seven Years War.  I think the basic mechanics work fine for the later period, and I quite like the activation mechanic as well as the combat resolution model.  There is also a 6mm play sheet readily available which gave me the ranges I wanted for a battle at this scale.  (Musket's max range is 6cm, and movement ranges from 6-10cm for most elements)  Taking Peter's OOB, I translated it into Honours of War terms and came up with the following. 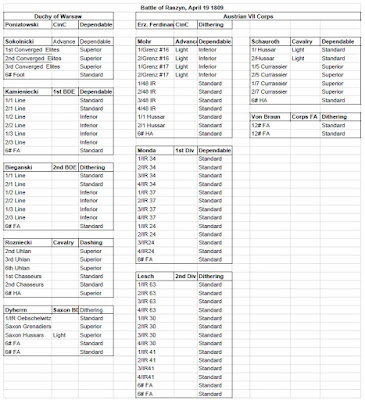 I considered folding Oberst Von Braun's two 12# batteries into Mohr's command, but decided that his dithering rating would favor the historical outcome where they played little part in the battle.  (I would not be disappointed.)  I also opted for some additional rules to help reflect the historical scenario
With that, I set up the board using my newly acquired Wizard Kraft rivers and roads, and commenced to breaking out my long neglected 6mm Austrians and Poles.  Peter's map is for a 12'x6' board with 28mm figures, so I scaled it down to a roughly 144cm x 72cm game area.

Here is a quick summary of the battle


At this point I decided to take a break.  Things have definitely become confused and both sides are wavering.  The Austrians managed to carry Falenty, and push the Poles back from the flank positions but at the overall cost of 10 infantry battalions and two cavalry regiments to the Polish loss of 3 and 1 respectively.  The Austrian superiority in Artillery is becoming quite telling, but I am not sure if they should have the ability to range as far as they are shooting.  Pictures and accounts of the battle seem to indicate that there was a lot of brush and vegetation to either side of the river that would have made accurate targeting difficult.  I have found a few areas where I mirrored the actual battle

While I had hoped to have Prince Poniatowski lead his famous counter-attack at the causeway, the snarl of units transiting the crossing made any attempt at organizing a counterattack unlikely to succeed.  Once it was straightened out, the Austrians managed to establish their batteries to make an attempt more expensive then advisable.

I plan to finish the last few rounds of this game, however I believe that a Soviet Assault Crossing to dislodge a US mechanized Infantry battalion may also be in order.....