Yet another project: My entry into the Age of Reason

Confession time:  I used to disdain the Seven Years War.  I am not sure why.  It is like US history from 1865-1898, it just bored me.  I treated it like I did my memories of the 70's; a burnt orange, avocado green, Carter's "malaise speech" filled, butterfly collar nightmare best locked away in the deep recesses of my mind.

Imagine my surprise then, when the military history module of  the US Army's staff college actually piqued my interest.  I stopped looking at it from the social aspect and recognized a time period like the Napoleonic period, but with more potential for dynamic action.  Most importantly it appeared to be a time where the Austrians (the Chicago Cubs of European history)  can, and did, actually win some decisive victories.  Frederick the Great, while an excellent strategic planner, made some whopping tactical blunders leading to massive reversals.  Finally the 11th hour turn of heel on the part of the Russians under Peter II makes for a wonderful head-scratching moment for world history.  On top of all of it, I think the seven year's war is the best candidate for the the real First World War.

Where am I going with this?  As always I blame Jon.  After several iterations of gaming the Battle of Kolin with Honours of War, Jon gifted me with a copy of the rulebook.  His earlier gift of Henry Hydes "The Wargames Compendium" only served to fuel the crisis.  While camping at Priest Lake over the summer, I read Mr Hyde's magnum opus and began to plan the genesis of my own SYW collection.  I even posted about it in my August Update stating


I am currently considering expanding into 10mm Seven Years War.  If the feeling doesn't pass by November, I may just have to succumb

Well it is November and....


I committed myself to seeing if the feeling would past and stockpiled my earnings from the sell-off of old and neglected projects with the intent of using it as the seed for my next big project.  A post looking for some used figures netted me the gift of some Pendraken Prussian Musketeers from one kind soul, so I guess the die has been cast.  I had a two week school that required me to live in a hotel near Montpelier last month, which provided some micro-scale painting opportunities.  I managed to paint about five regiments worth of Prussians, and so now comes the next challenge:  Basing.

Jon's 15mm collection is based on 120mmx30mm stands, and I like the look of them.  I originally intended to use a similar base size, and further add the battalion guns to my smaller scale units.  Getting the entire collection home, however, has changed my view however.

My 6mm Napoleonic collection was originally based with individual regiments on 30x60mm bases.  Transitioning to 55mm x35mm bases left me with an abundance of unused bases.  I already intended on using these for the converged Grenadier battalions and cavalry squadrons, so I figured I would see how the units look if I used two per regiment.  Jon adds a mounted leader to each of his regiments, and I have done the same thing with some of my 15mm Samurai collection, so I thought I would continue the tradition.  I originally planned on running about 40 figures/regiment + commander but the Pendraken figures are a little large for that.  (I still plan on doing that with the Old Glory castings)

This has resulted in the age old problem:  Base Size Blues...

I really prefer using single base units, but they do suffer on the tabletop for things like forming columns, or aligning with terrain contours.  The two base/unit solution works well, but it often results in the the asymmetry of alignment with the command group.  Before you know it, you are using 3-5 bases.

With that in mind I am experimenting with how I want to base this collection.  (This the lack of flock on the stands)  Right now I am leaning towards the two stand solution with the mounted commander on one stand and the foot command group on the other.  It gives the right appearance in line (see above) but can look a little awkward in column: 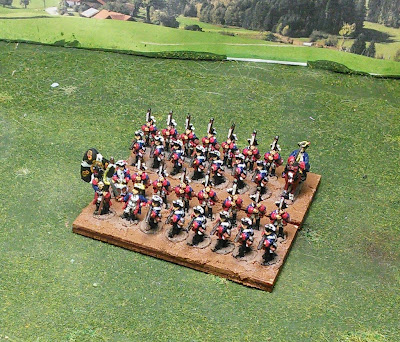 For individual battalions I suppose it will work, although I think the grenadier units will look better, overall

The only downside is that it does preclude me from representing the battalion guns on the regimental stand itself.  I only see that working if I increase to three stands and reduce the figure count.  Instead I may try just aligning a 3lb cannon stand with each regiment for now.

Before departing to my course, I broke down and joined the Old Glory Army and sank my amassed fortunes from the summer miniatures sales into reinforcements.  That package was waiting for me on my return, so a whole new White Menace awaits me for the winter.  To compound my madness I even opted to start a 18mm Russian army to expand the options for battles with Jon's SYW collection.

With this long meandering diatribe aside, does anyone have any better suggestions for basing this new collection?
10mm Honours of war Pendraken Prussia SYW