With  8 months behind us and the discovery that I never hit "publish" on my six months review, it looks like as good a time as ever for a brief retrospective.  The recent spate of posts on project planning and objectives makes this update a little more timely.  I suppose I shall jump on the band wagon and talk about long terms objectives as well.

This year I have opted to change my metrics somewhat from raw points to actual unit/project completion measurements as I think it gives me better focus.

Here is my current status: 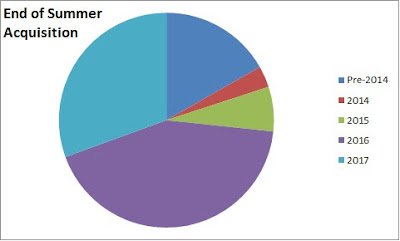 Here is where I wanted to be based on clearing out the backlog: 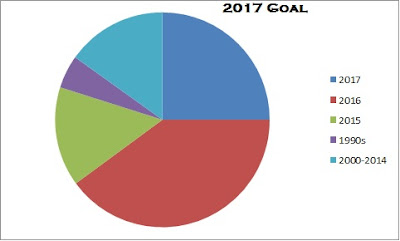 Overall, it is looking better than anticipated.  I have managed to avoid picking up a lot of new models (so far) and I am making a serious dent in the 2016 backlog.  My overall goal is to keep 2017 models to less than 25% of my productivity and I am currently over at about 30% (Not bad considering both the new Kushite Egyptians and upgrading my 3mm Modern Armor collection).  Still, I have a lot of Korean and Japanese infantry to finish, so that may help to drive down the percentages. 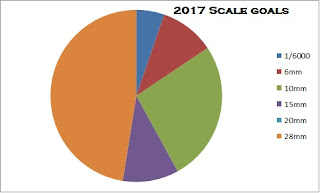 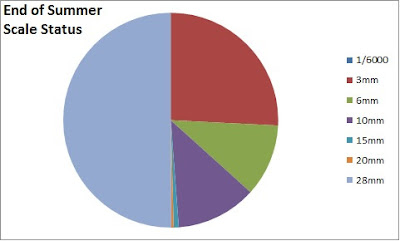 28mm is continuing to dominate, but my "6mm every month" goal is helping to maintain the levels where I want them.  My sudden burst of 3mm inspiration, however, has completely blown the curve.

I have completed 147 of the initial 154 units I projected for this year, but changes in emphasis, and a re-evaluation of the lead pile has increased the number remaining to 98.  That said, I should still be able to complete the initial objective as it does contain the "low-hanging fruit" of several partially completed 3mm and 6mm projects.

Finally, where am I on project specific goals?


In terms of existing projects here are my 2017 goals: 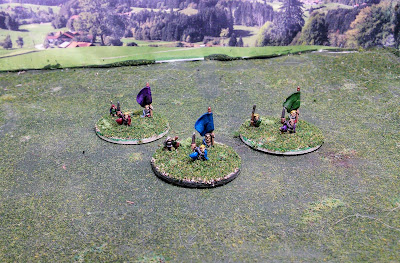 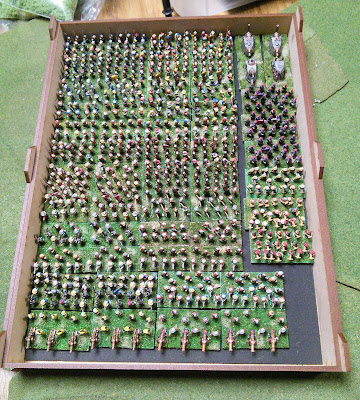 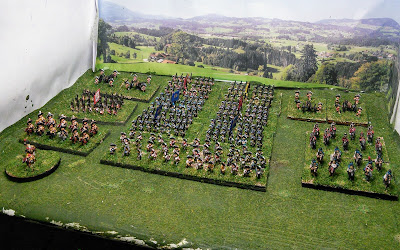 This brings us back around to the "Project List" question currently bouncing around our little corner of the blogosphere.  I am a complete dilettante when it comes to painting and collection as my interests are wide spread and seem to change month to month.  When I first returned to historical wargaming, I set myself the long term goal of building representative collections from throughout the history of the United States Army.  I began with Modern and WWII microarmor and then expanded into 15mm ACW.  Since then I have tried other eras and have a few "orphan projects" to show for it.  I have also expanded my areas of interest greatly as I intersected with other hobbyists over the years.  The departure of a good friend and fellow ACW enthusiast in the late 90's also taught me the dangers of only collecting one side of a conflict, as I found myself in the possession of a sizable Union contingent  standing alone on the game table.

Linked with the above problem is the one of scale.  I find that I am historically out of touch with the direction the hobby is going in this regards.  When 15mm and 28mm exploded for WWII, I found little interest in my 6mm and 20mm collections.  I also continue to search for balance with the two types of games I like to run:  Mass Battles and Skirmish.  I have now settled on 6mm/10mm for my mass battle goals in the future and 28mm for my Skirmish gaming (as well as Impetus style games.)  I also continue to purge my entire collection of all of the painted figures done by others I collected in the early stages of my hobby.  (With the notable exception of those done by friends and compatriots which have their own sentimental value.)

I suppose I need to break down the entire collection at some point, but just starting the process resulted in a spread sheet that looked like this: 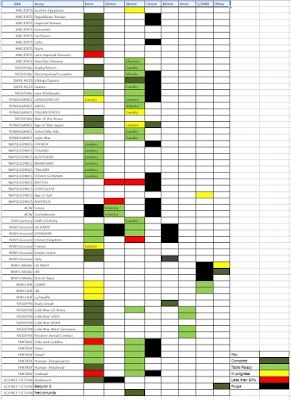 And breaking this down could really cut into my painting time....