August 23, 2017
Picking the game up from the tactical pause at the end of PART ONE, the Austrians are pressing all along the river and both sides are fairly battered.  The Austrian 1st Division is nearly spent, and the Advance Guard is beating their heads against the bridge on the Right.  The Polish Advance Guard was finally ejected from Falenty and is reforming North of Raszyn itself. 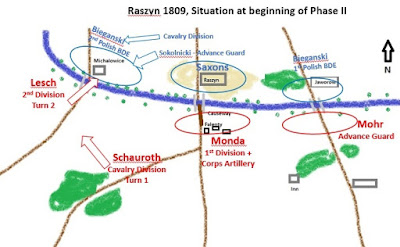 Both sides established their unit objectives:

Austria
The Austrian commander recognized that his best opportunity to force a crossing was on the right.  He needed to force the crossing before the Polish reinforcements could move in to support.  He detailed his plan to his commanders:


Poland
The Polish commander recognized the same vulnerability in his lines.  His left was secure, and his center, while weakened, had gutted the Austrian 1st Division's infantry.  The Austrians were seeing some success against his dithering 2nd BDE commander, and he raced reinforcements to try and plug the game.

With objectives thus established, the game continued.  The first result being a spate of "1's" on the command rolls on both sides.  The forces on both sides of the River at Jawowow decided they liked where they were and were not moving.  This is where the effects of the "Dithering" Austrian Commander really impacted the game.  In Honours of War he cannot have any positive influence on his army, and limits your ability to get those critical double moves.  The Polish commander was able to instill confidence in his subordinates to get them into the fight, and inevitably won the race to the right.

At this point, it became obvious to the Polish commander that he needed to withdraw before his losses cascaded.  The overall result was an Austrian tactical victory and a Polish strategic victory.  The Polish losses were less than a quarter of those of the Austrians.  Although they lost their advanced position, and inevitably would be forced from the river, they managed to gut two Austrian divisions.

This proved to be a rather good scenario, and did manage to produce a generally historical result.  In using Honours of War, a Seven Years War rules set, I managed to get a fairly quick playing game that felt right for the time period.  The 6mm scale game rules provided the right overall feel for the maneuver (Musket range = 6cm, Movement = 6-8cm) The rules are designed to favor direct fire and minimize the impact of Close Assault and Cavalry (you can hear the designer's thought here in an interview with Meeple's and Miniatures.    Go to 1:35 for the start.)

I tried a few rules addendum to reflect the Napoleonic period

Response to charge
Infantry response to cavalry charge  roll 3+ (4+ if 3 or more hits) May take either action:
Cavalry can halt charge into Square, but still will receive fire.

Basically, I wanted to make charging an ordered unit a dangerous proposition, but encourage decisive action to destroy the weak and lame.


With that, I have completed my initial trial by fire of the long delayed Saxon brigade.  Although they did little more than receive artillery fire, they did so with great aplomb.  I have all of the forces necessary to play through the 1809 campaign painted and prepared, so will start working my way through the campaign with some solo games (unless my son suddenly gets the urge to try analog entertainment again.)  My original intent was to play through sequentially, but Grochow is looking fairly tempting.
1809 6mm Baccus Honors of War Napoleonics