All this focus on Montebello 1859 of late had me thinking about my long abandoned Franco-Prussian War project.  Many years ago I traded some old fantasy figures for a selection of 10mm Franco Prussian War figs.  I don't know the manufacturer, but I remember putting them off to the side when I realized 1) How big a project this would be.  (ah, so young and naive) and 2) How brittle the figures were.  Many of them arrived with heads and barrels snapped free or broken.  I put them off to the side, and they have sat fallow now for almost 20 years.

I dug them up a few weeks ago, and they had not improved with age. 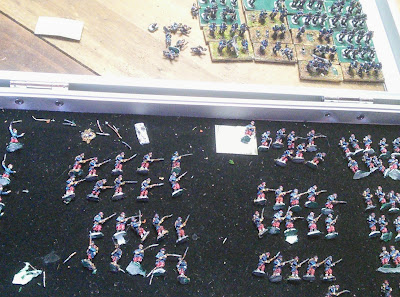 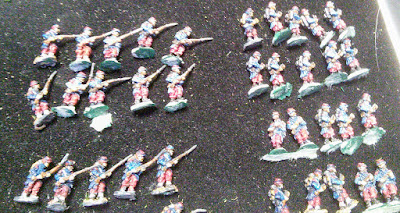 I decided to at least clean them up and base them for a potential future application.  Given the size of units in the war, I opted for Regimental/Brigade basing as my starting point.  I opted to go with 30mmx60mm bases using the scientifically sound concept of "I have a lot of unused 30x60 bases."  I opted for 20 figures per base as it provided a relatively dense concentration of figures and looks good for this scale. 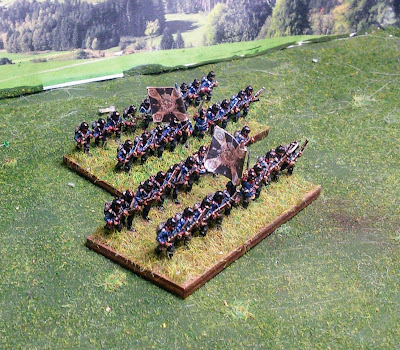 I sorted out the figures to maximize the number of undamaged figures for the front rank.  Broken barrels and muskets were relegated to the back rank.  (This did not prevent the relatively brittle barrels from snapping off during painting however.)  This gave me enough figures for two regiments of Prussians and three of Frenchmen.

I went through and cleaned up the existing paint jobs, covered chips, and added details.  I then gave them a wash with diluted Windsor-Newton Peat ink, and used my Flockbox to give them a grassy finish.  Overall, I think they turned out well, and still look acceptable for the wargames table.  (10mm is similar to 6mm in that the real effect of the miniatures is best shown when they are massed and viewed from 2-3 feet away.)  I am sticking with the original flags, for now, although I need to come up with a new standard for one of the French regiments.

I have enough figures to cobble together another stand for both sides, and that is where the project will reside for the immediate future.  I still have some interest in the time period, but the last thing I need to do is split off into another 10mm project right now.  That said, I am putting 10mm FPW figures in my trade list and 'good deal' watch list for the future.

Completion of this group also qualifies as a "From the Shelf" project, so I can at least claim one of those and one 6mm update this month.  My 2017 goals are still intact three months in!  That has got to be some kind of record. 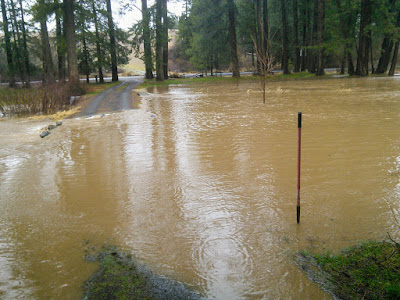 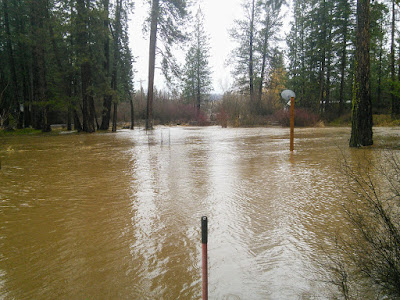