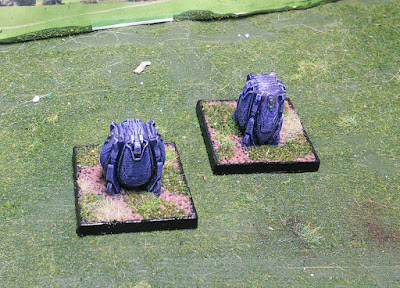 It's another terrain post!  Mostly.  It has been a few months since I completed most of the UNSC models from the Halo Ground Command boxed set with little forward momentum.  In order to play the game with my son, I need to complete the covenant side as well.  (I suppose we could try it with unpainted models, but what would be the point in that?)  The Covenant forces present two significant challenges for me:


For the metallic tones, I have been using a Vallejo metal effects additive to give a metallic luster to existing paints.  I am not a big fan of enamels or non-metallic metal painting techniques, so it seems like a fair compromise.  It works well for the smaller metal plates on 15mm figures, but the larger pieces look a little wonky.

This leads to the purples.  The boxed set comes with 7 resin terrain pieces including 2 Covenant equipment pods, two UNSC gun racks and three futuristic T-walls.  I opted to try out my purple approach here rather than with the larger Ghost grav -bikes. To see if I can get a good technique.  My compressor is acting wonky, so airbrushing is off the table.

I opted to start with a black undercoat and then successive dry-brush layers of VJ Royal Purple, then mixing in AP Alien Purple and finally pure white to give some definition.  I gave the entire think a gloss-coat before hitting it with Minwax and a satin coat.

The white came off with more chalk than I wanted, so I will need to try something more subtle for the Ghosts. 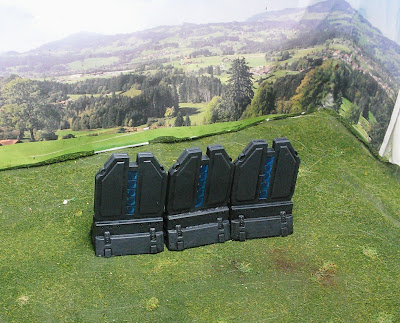 I tried to add some gem effect to the windows using different shades of blue and some gloss coat. 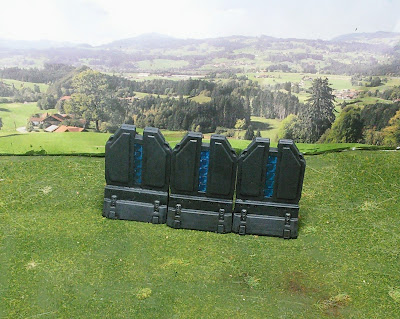 The weapon's lockers are much more basic with a Camo green coat and Grey-Black highlights on the sliding doors. 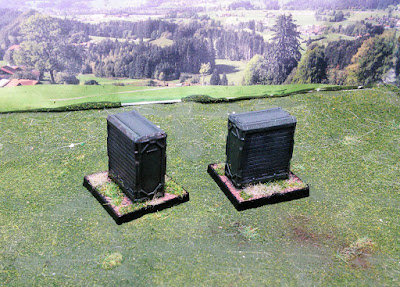 A little bit of a variation from my Japanese/Korean stuff of late, but variety is the spice of life.
15mm Halo Ground Command Science Fiction Terrain