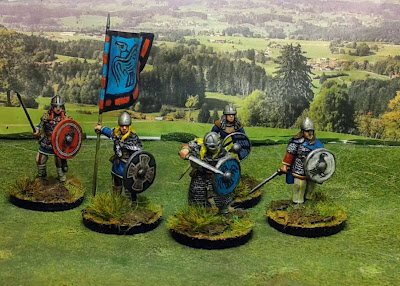 I finally got around to watching "The Last Kingdom" over the summer and felt inspired to resurrect my Saga/Lion Rampant viking project.  I has wanted to try out some of the new Samurai range from Footsore Miniatures now that Warlord is no longer supporting Test of Honour.  I decided to use the opportunity to check out their Viking minis as well.  I picked up several packs of figures as well as some Skraelings to use as tribals for Ghost Archipelago (which could also be the start of a French and Indian War native band if the mood strikes me... more of them later.)

For the Vikings I went with a pack of selection of personalities, berserkers, Danes Axes, and their Shield Maidens.  The first finished versions are shown here.  For the shield maidens I painted the standard bearer and war leader as well two of the armored 'huscarls', I then added a single warrior with tunic and spear.  I did that one with grey hair to represent one of the townswomen stepping up to defend the hearth from raiders. 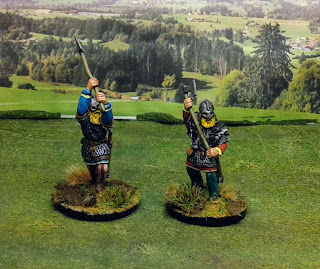 Overall, I found the Footsore sculpts very clean, with sharp detail.  I am still playing with the contrast paints to see how they work best.  For these, I went over all of the armor with the Black tone rather than base coating in white.  The overall undercoat was done in a light grey Chalk Paint, which also helps to pull down the brighter colors.  For the skin tones, I have switched from using Vallejo Sunny Skintone to AP Barbarian flesh and Contrast Gulliman Flesh on top of it.  I still gave the figures the  minwax treatment both to get the shading I want and the added protective coating.

I couldn't resist picking up their Odin figure, so here he is as well: 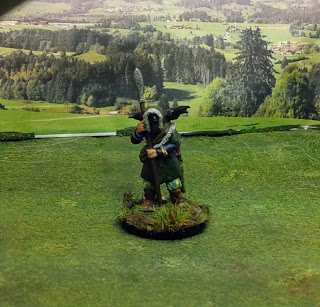 I really need to add some snow to the base, and perhaps he will find a place in Rangers of Shadowdeep or Frostgrave in the future.  I briefly considered doing all the bases with a mixture of mud and snow, but settled on using just the mud coating over the traditional basing.  While snow is tempting, it seems to limit my game options down the road.

The shield decals are mostly from Little Big Men studios which I like overall.  (Though they have the most fiddly application process I have yet come across.)  The banner was hand done from several examples I found on-line and will most likely be replaces with some more professional down the line.  I tried to freehand the Raven design on the warlord's shield with a art pen, but it came out looking like a rather fierce duck.... 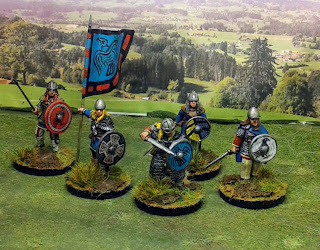