As promised: more 20+ year old figures finally seeing completion!  I think Jon and I last go our forces on the same table for this period in 2002.  I initially knocked out some landing parties, infantry and artillery and then kind of petered out.  (In my defense I spent 2004-5 on an involuntary Southwest Asian vacation and was a bit distracted from the hobby.)

I bought a bottle of Contrast "Ultramarine Blue" a few weeks ago to see how well it work for Union uniform coats and this kinda happened:

14 more Rough riders in skirmish order brings the total up to 36.  (Finally completing the bag I bought so many years ago.)

I also finally finished off the Gen Wheeler figure.  He was one of my favorite characters in the TBS Rough Rider's movie for this one exchange:

Wheeler: "We got the Yankee's on the run boys!"

Aide: "Sir, those are Spanish Regulars and they are withdrawing in good order" 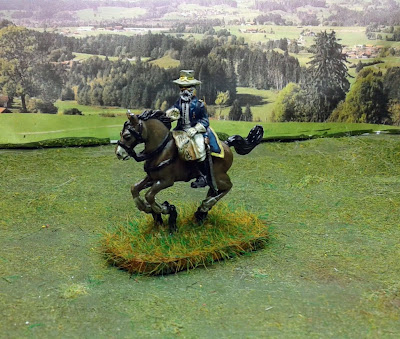 After completing the two command models I also noted that they do make for an interesting vignette :