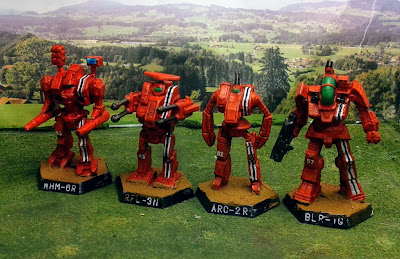 I was cleaning out the shop this summer and found a large sealed mason jar of dubious contents.  I swirled it around to see the arm of an old Warhammer mech appear out of the murk against the side of the glass.  The contents turned out the be a large number of old Ral Partha plastic and lead Battlemechs that I had put in a solution of simple green in the hopes of someday stripping out the abhorrent paint jobs they arrived with.

Well it turns out 12 -15 years in the solution was just the trick and I was able to clean many of them up to a presentable (and paintable) fashion.  These are the old plastic 'unseen' mechs from 80's-90's era that were done in softer plastic and thus the level of plastic flash was astounding.  I tried to pretty up a lance's worth and decided to paint a group to see how the contrast paints would work.  I opted to do the Lexington Combat Group as a throwback unit. I was even able to resurect some ancient transfers to add tactical numbers and some other details.

I decided I was on a roll, and tried to tackle some other mechs from the bits box.  These were originally started as "Sword of Light" mechs in pure red, but I opted to spruce them up with some shale grey legs.

Finally the bottom of the jar revealed some truly ancient lead 'Assault' mechs, so I opted to do them up as the Lyran Guard. 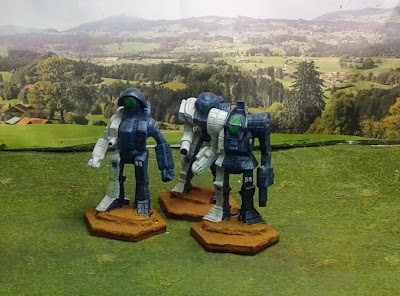 Not my usual fare, but it was a fun diversion.  It also inspired me to break out the board game for a few games with my son.  Turns out he like big stompy robots as well.  I may need to paint some more...
6mm Battletech Science Fiction