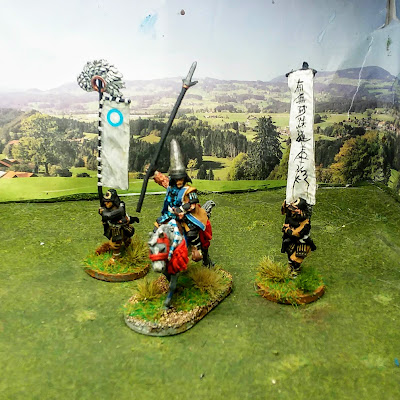 Kato Kiyomasa is a rather controversial figure of the Imjin War.  He was commander of the Japanese 2nd division and had an intense rivalry with Konishi Yukinaga, the Christian commander of the 1st division.  (After the battle of Sekigahara he would gain control of his lands in Higo as well)  Kato was a militant Buddhist who detested Christianity and brutally suppressed it in his own domains and slaughtered christian non-combatants following his battles to try an stamp it out for good in Japan.  He was a devoted follower of Toyotomi Hideyoshi who once saved his life even as his lord was considering condemning him to death.  Did I mention that he outlawed the recitation of poetry as he felt it diminished a man's military capacity?

In Korea he was known as the Devil General for his ferocity and brutality.  He would manage to drive all the way to the Yalu river before he faced off against the Jurchen Horsemen who proved a much more implacable foe than the Japanese had expected to face.

Here are some select quotes that define the man


One should put forth great effort in matters of learning. One should read books concerning military matters, and direct his attention exclusively to the virtues of loyalty and filial piety. Reading Chinese poetry, linked verse, and waka is forbidden. One will surely become womanized if he gives his heart such knowledge of such elegant and delicate refinements. Having been born into the house of a warrior, one's intentions should be to grasp the long and the short swords and to die


It is said that the inferior seek to emulate the superior. Thus, if a general slackens only a little, those beneath him will be greatly negligent.

If a man does not investigate into the matter of bushido daily, it will be difficult for him to die a brave and manly death.


As for the decorum at the time of a campaign, one must be mindful that he is a samurai. A person who loves beautification where it is unnecessary is fit for punishment.


so definitely a fun guy to have over for drinks and conversation....


There are several versions of Kato Kiyomasa available in 28mm.  The Perry set comes with two standard bearers and is modeled on the Osprey rendition of the second Seige of Jinju castle.  During the battle Iida Kakbei, one of Kato's standard bearers hurled his banner into a breach in the wall to allow his lord to claim the honor of first into the fortress.  The banner has a Buddhist inscription that reads Namu Myōhō Renge Kyō  Hail to the Lotus of the Divine Law.  The other banner has his circular mon.  Perry minitures offers a Kato decal sheet that includes the inscription making for a rather easy, if striking, command group. 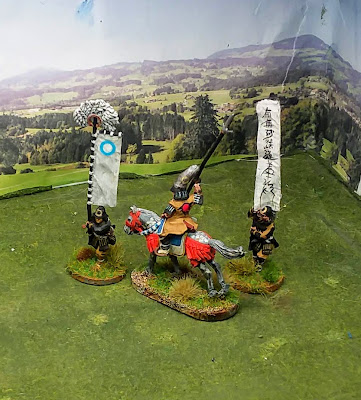 I still need to find a better way to base them as a group, however, as they standards are solid metal and thus the figures are very prone to tipping.
28mm Imjin War Perry Miniatures Samurai