The project that should not be. 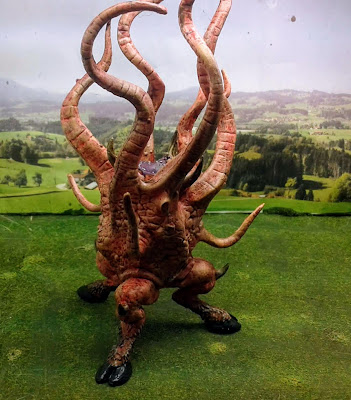 Working through the pile of PVA figures for the Runewars Miniatures Game has got my gears turning on doing the same army with some alternative figures (because I am me, and of course it did.)

Back in 2015 I decided to re-purpose some of the Wargames Factory Samurai Cavalry for a Halloween game. I managed to build up a backlog of plastic samurai models since then, so I figured I could use them to build a Japanese flavored undead army to replace the classical European one that comes in the box.

One of the cavalry/monster figures for Runewars is called the carrion lancer.    It is basically a skeleton riding a giant, acid spitting carnivorous worm.  Since Japanese Mythology tends towards body horror, I decided that one of Reaper Bone's "Dark Young" figures from the Cthulhu mythos would do the trick.  It has the right mix of grasping tentacles and alien symmetry to fit the bill.

To add to the look I opted to use a base of Army Painter "Barbarian Flesh" with a dark red wash.  This really gives it a sickly flesh-like appearance to make it slightly more unsettling.  I think a group of these advancing in a unit will provide the proper sense of existential dread to drive my opponent from the field. 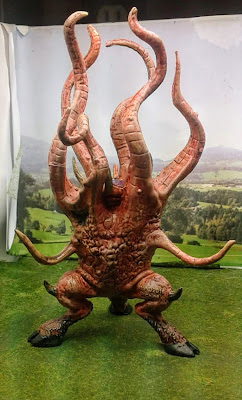 This is just the first of some planned units for the army.  I have a few other things planned to really punch up the game.
28mm Fantasy Runewars