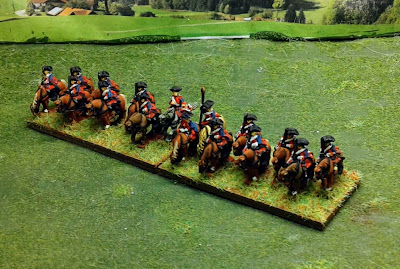 First up is another unit of Austrian Dragoons, this time the Kolowrat-Krakowski Dragoons.  I am slowly building up my Austrian Cavalry contingent which unfortunately means I am a long way from having a field-ready force.  The Austrians appear to have fielded approximately every Curassier and Hussar  in existence in most of their battles.  These are more old glory figures, but this time finished with Windsor and Newton Professional Matt Varnish graciously provided by Jon.   It is the single best matt spray I have used as it kills every last but of sheen on the models.  I am now converted, and plan to hit some of my old collection with the stuff as well.

In addition to the cavalry I made some headway in building my 40 man units up to 60 figures.  (Basically adding the 3rd rank.)  I really prefer the heft and mass they provide for this scale.  Although I am fielding them as regiments, they look good for battalions as well.  I need to swap the flags on one unit and replace a broken flag pole on another, but they are table ready for now. 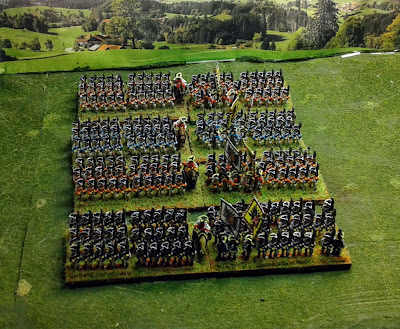 I also took the opportunity to fix IR# 43 Platz.  The unit's light orange facings came out far too yellow, so I opted to upgrade them with a more distinct orange shade.


Finally a new unit added to the mix IR#12 Botta.  The joy of painting Austrians at this scale is that the regiments are fairly interchangeable.  When in doubt paint either red or blue  cuffs and lapel leaving everything else white. I think that accounts for about 50% of the German Infantry regiments in the later half of the war. 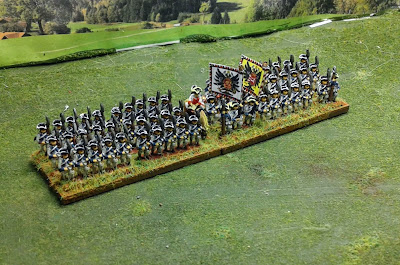 On the 18mm front, the last Zorndorf update will have to wait as I have delivered the force to Jon's to allow him to set up the table for our refight at the end of the month.
10mm Austrian Honours of war Old Glory Miniatures SYW