Rolling out the big Guns 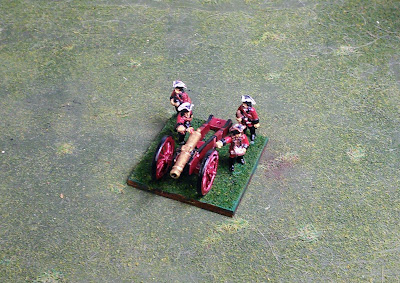 Just a quick update as I cross another unit off the list for Zorndorf 2018.  This time it is a 12 pounder battery.  The gun is from Eureka miniatures and the crew are the remaining figures from the Blue Moon artillery crew set I picked up back in November.

I still have three more guns to go, as well as some limbers.  I picked up two oxen-pulled limbers to make it easier to ID the heavy batteries.

I am managing to maintain fairly good progress on this project by applying some assembly line procedures.  I just finished painting two bags of Blue Moon Russian Musketeer Infantry which will form the core of my next four regiments.  Along with them, I just did the base coats and drybrushing for 30 mounts for the Hussar's.  Next up, I plan to complete another 30 grenadiers and get started on the Observation corps infantry.  Following that, I will get started on the command elements (guidons, musicians, officers) for my regiments.  It may result in some rather bulimic updates, but the goal is knock this out by August, so mass production methods will need to be employed.
18mm Blue Moon Eureka Miniatures Russia SYW