A question of Command (Tents) - Samurai Battles with the family. 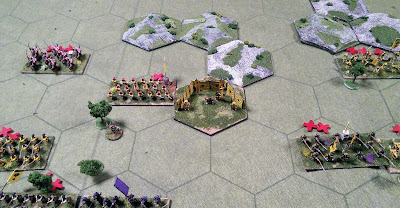 With winter break upon us, my son and I have hauled out Samurai Battles to try and actually make it through all six phases of 4th Kawanakjima.  This motivated me to finally finish a 15mm command tent after all of these years of using the 6mm one as a proxy.


The base just has a single Daimyo figure with a some bodyguards/retainers.  I still need to paint up three distinct samurai figures to represent the bodyguard "counters" to record hits in the fight. 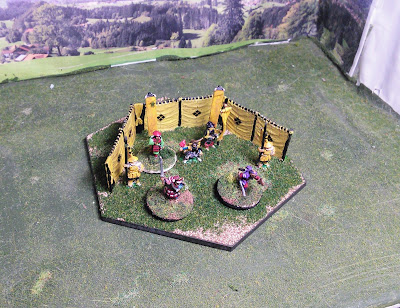 As for the outings in this year's attempted play-through, I only have a few pictures.  Mason prefers if we just play, and I am not one to argue when I can get an opponent.  Lately, he has been challenging me to games of chess.  He is really starting to give me a run for my money as well.  He has a fairly strong grasp on the rules for this Samurai Battles, so our games have become quite close-run affairs.

Those familiar with Richard Borg's work will no doubt recall that the scenarios are fairly stacked in favor of the historical outcomes, not necessarily for play balance.  Thus, for most of the engagements I found myself facing the Uesegi steamroller with my outclassed Takeda!

I tried to fall back to allow my foot samurai to help repulse the red juggernaut.  That boy is a demon with Cavalry, I went down fighting  5-3 Uesegi. 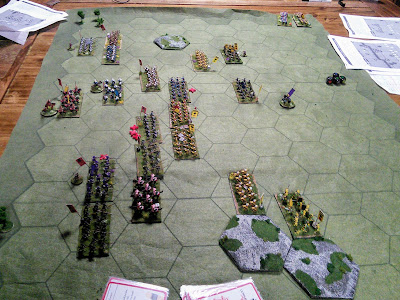 Once again, he kept up a relentless assault.  I managed to get my Cavalry into his backfield with a fortuitous hand, but couldn't spare the command activation's to get my General attached to a unit. 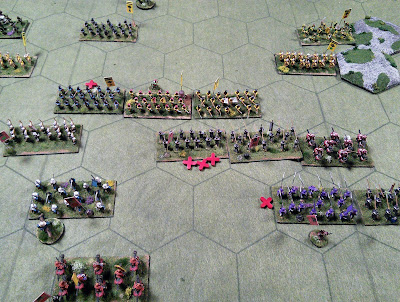 In the end, it was enough to knock him off balance and secure a narrow 5-4 win for the Takeda.

I would be a poor general to blame my cards, so I will blame his instead!  I watched as he dropped activation after activation on his right side and proceeded to overwhelm and destroy my entire left flank.  Kenshin found himself on the shores of the Chikumagawa river, well behind Shingen's command tent.  He did not even need to come back around as Uesegi missile fire wreaked havoc on the Takeda cavalry.  The final stroke was a 'double sword' roll following a single bow hit to a Ashigaru unit with a general attached.  Boom! 6-4 Uesegi victory in a very rapid game. 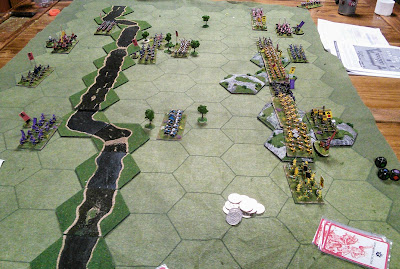 This scenario is a brutal slug fest.  The Uesegi are outnumbered, but defending the fords.  The Uesegi briefly flirted with a forward defense, but then found it better to fall back across the river in the face of a wave of Takeda elites.  Deft archery on his part gutted two Takeda samurai units, and both sides were near the tipping point as we stopped play for the evening.  This scenario is one of the longest I've ever played as you can see from the massive discard pile in the photo below as well as the the stacks of Dragon cards for each player.


How will this play out?  We shall see if I can get him down to the den to finish the game and then finally try Phase 5.
15mm Essex miniatures Old Glory Miniatures Peter Pig Samurai Battles Terrain