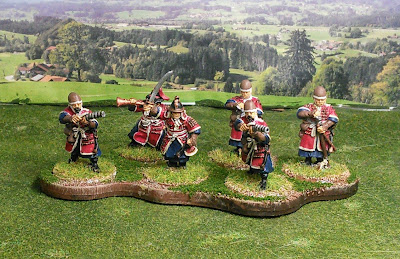 Following quickly on the heels of the Spearmen is a little fire support.  These 12 are the first half of a planned 24 figure formation.  I really should do bowmen first, but these guys comprise a unique formation.

The Koreans were caught somewhat off guard by the massed volley firing Teppo of the Japanese invasion force.   An earlier trade delegation had gifted one of the Japanese Matchlocks to the Korean King, but he had sent it off to his armory as nothing more than a novelty.  The Koreans rapidly learned to appreciate the power of the new weapon.  (For their part the Koreans did have a wide variety of cannon and rockets.) 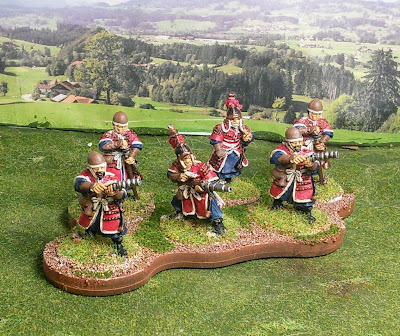 This group represents a later unit comprised of a mix of captured/copied Teppo and more primitive hand cannons.  I went with a red and white motif to tie them in with the main colors of the force, but also make them stand out a little on the table.

The command figure is actually a Korean swordsmen, with the nub for the shield filed off his left arm.  All of Perry's leader models come with a bow and quiver, which really seemed out of place for this particular unit.
28mm Imjin War Korea Lion rampant Perry Miniatures