October 31, 2012
The battle had been hard fought, many of the Kings cavalry had fallen or were injured.  Engineers worked desperately to repair the breach in the wall.  The King looked to the North, his attention drawn to a distant keening cry.

"I must know what is happening out there!" he declared to his aide, "I must know if there is truly another threat!"

"Your Grace," he stammered, "our reinforcements are only just starting to arrive."  we are still trying to shore up our defenses near the crossings.  Too many of the scouts have been lost in the fighting.  I don't know if we have the men to spare!"

The King stated bluntly "Sacrificing reconnaissance is sacrificing us all!  I must  see what is happening for myself, summon my Guards and what few Rangers remain.  We are going out to have a look."

The King assembled a group of knights and retainer along with a few rangers to conduct his scouting mission.  Sir Blaque would take one of the kings guard and the remaining Rangers over the bridge to investigate the fields to the North.  King Mason would take Sir Rouge and two of his personal guard to investigate the lake North of the ford.


A few miles north of the river, both groups were accosted by a pack of fierce wolves.  The rangers fired their bows at the rapidly moving creatures, but their unearthly speed allowed them to dodge each attempt.  The group fell on the group as a snarling mass.

Sir Blaque managed to fell the first beast, while the King's guard shot another with his pistol.  Two of the rangers were badly mauled, with one wounded and retiring to the safety of the bridge.  The group managed to fend off the last of the worlds after a short skirmish, but all were hurt in some way by the altercation.

To the east, King Mason ran into a pack of wolves as well, and in the distraction of the fighting failed to hear the angry cries of a swarm of bats, until they too swept over the party.  This fight too was brutal and quick, yet all of the Kings men escaped relatively unscathed...


The scouts pushed forward nervously eyeing the woods.  A flash of motion in the corner of his eye, stopped one.  He turned in wordless terror as a ghostly image of mailed warrior emerged from the trees and flew screaming towards him. 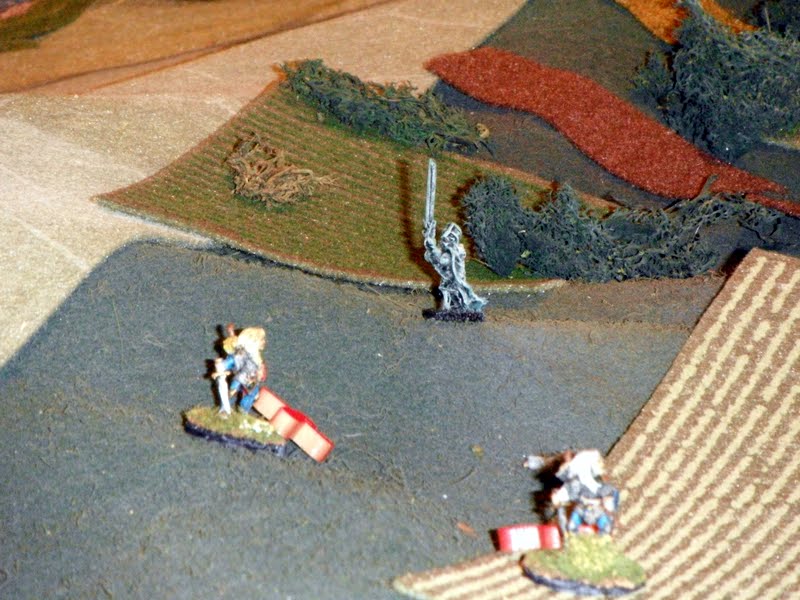 Unable to stand before the terrifying apparition, he turned and fled, only to be cut down.

Sir Rouge rode out far ahead of his king to chase down the Skeletal archers in the trees.  Defeating him easily, and flushed with victory, the knight rode on further.  Alone and unaided he was no match for the Spectral apparition of Northern Ax-man that emerged from the trees before him. The creature deftly blocked his attacks and then cut him down with a single swing.
Desperate to save his men, the King rode west, cutting down the unearthly abominations that manifested before him.  He discovered Sir Blaque, grievously injured and desperately trying to protect the last of his scouts.  He cut down the last of the ghosts, and went to tend to his men.

The king looked down to where the ghost had just fallen.  The apparition had seemed whole enough as their blades had clashed, and the dagger that cut his horse's flank was real enough.  Still, the thing had just faded away.

"What dark magic is at work here?" he thought  "What would drive the creatures of the night to such madness?  What would stir the dead to attack the living"

As if in answer he heard the distant beating of drums.  Riding to the crest of the hill, he looked out the see the remains of an ancient city.  Stone foundations were scattered about the horizon, overgrown with centuries of vegetation.  As he peered into the darkness he swore he saw movement.  And then the clouds parted to reveal the light of a full moon.  And at that moment, he saw them....
*This battle would be fought as a skirmish game.  The King would ride out accompanied by two retainers, 3 Kings Guards, and 3 'Rangers'  Mason split his force into two groups.  1 Leaders with a guard and 3 scouts for the bridge, and the King with 1 Knight and 2 guards on the ford

For the rules we continued to use the CCA hexes and dice.  With the following modifications


Special Rules
*Save:  Roll save dice for each hit, any result of special (command) negates the hit.
*Swarm: Attacker losses one die in close combat from distraction/swarming attack.
*Fear:  Attacker must roll one die to charge.  If result is a special (command) they are too afraid to charge.
*Ghost and specters ignore flags, they never fall back.
15mm Battle report Fantasy Father and Son gaming Halloween