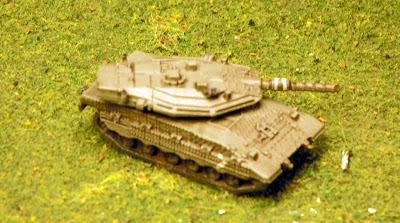 I have finally finished a large selection of GHQ's more modern Israeli armor, including the recently released Namer Heavy APCs.  I have been trying to find a good mix to match the IDF's grey-green paint scheme, but can't seem to find a color with the right 'bluish-ness'

I bought these directly from GHQ during that last big sale, so everything is in groups of 10. 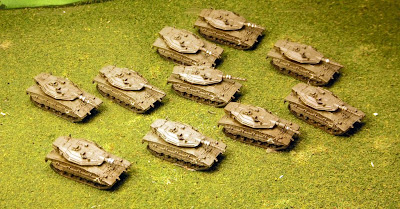 It is an understatement to describe GHQ models as beautifully sculpted.  GHQ models are rarely anything but, and these are no exception.  At $2 a model they are expensive for microarmor, but a bargain compared to what companies like Ironwind Metals charge for 1/285 scifi vehicles. 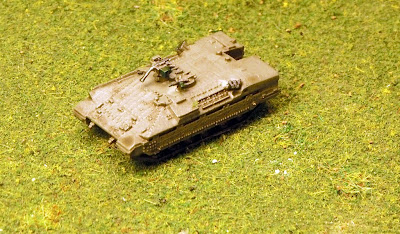 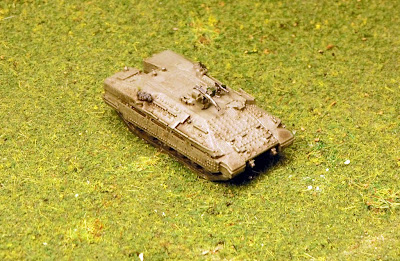 This is the newest Heavy APC in the IDF.  It is a modified Merkava MBT following the Achzarit (T-55) and Puma (Centurion) tank-based heavy APCs.  I find it interesting that the Israelis and the Russians both seem to be moving in the opposite direction of Nato and US armies by increasing the armor protection of their APCs, rather than moving towards faster, lighter vehicles like the Stryker and VBCI.

This is the first of the Heavy APCs I remember reading about years ago.  An interesting way to utilize the obsolete T-55s the Israelis captured back in 1967 and 73.  GHQ just released the Russian version of the T-55 based HAPC (BMP-T), so I suppose I will have to add some to my Russian collection. 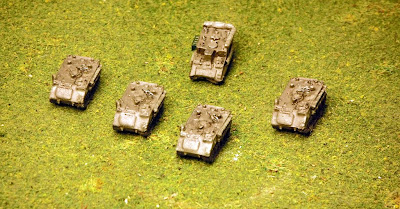 and, interestingly some modified M51 Shermans I picked off ebay.  These have been changed to represent the Soltan 160mm Mortar carrier. 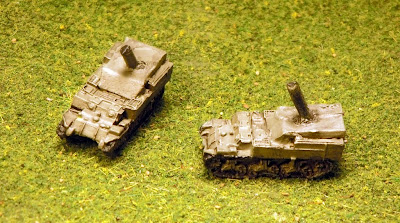 I also finished three packs of IDF infantry, but those are now awaiting basing, and may not be completed anytime in the near future....
6mm GHQ IDF Microarmor Modern Spearhead