April 22, 2012
I finished the latest addition to my Modern Spearhead force thanks to GHQ's new M2A3 models.

I was able to complete the first Combined Arms Battalion for my 1st Cavalry Division Heavy Brigade Combat team: 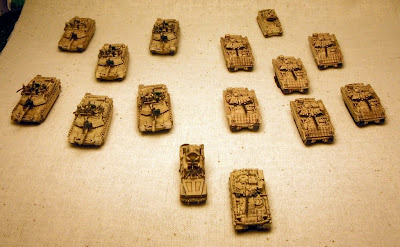 I added the ITV to represent the Battalion's Fire Support Teams, since I have seen the new B-FST yet.  The M2A2 is standing in for the M3s from the Scout Platoon along with the M-ATV.  I still need to do a BN HQ stand.

The 2nd Battalion is still lacking one of the Armor companies, so I added some SHORAD to make up for it. 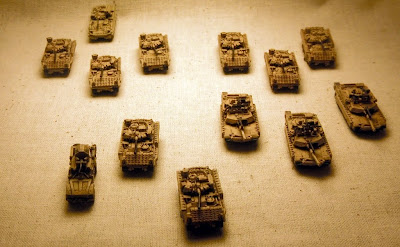 Most Importantly I need the Brigade Cavalry Squadron 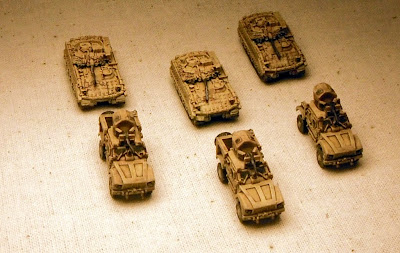 The MTOE on the HBCTs seems to be in a constant state of flux.  I have two Assault Breaching Vehicles awaiting mine plows, and a pack of M577's to provide some command elements.  I will need to add some M1151s for the MPs, and some Bradley's for the ENG company.  I think I will eventually add a National Guard CAB with M1A1s and M2 ODS just to give some additional maneuver capability.