February 15, 2012
During my last order from Baccus, I was surfing around when I found these little fellows:

I've never really been interested in the Great Northern War, but I've always liked the look of the Winged Hussars ever since I painted my first GW Kislev Winged Lancer.  Their flamboyant uniforms and legendary martial prowess make for a great tabletop addition.   I read some accounts where they painted their horses red and white, so thought I would do the commanders accordingly for a little variation. 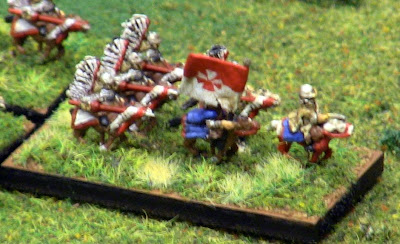 A single pack comes with 45 figs, and I asked for only two command stands.  That allows for two units of three for Warmaster Ancients style games.  Or one unit of 6-7 stands for Field of Glory style units. I based them in deep wedges as most accounts rated them as heavy shock cavalry.

Baccus is supposed to be releasing some Ottoman Turks in the near future, so I am tempted to expand my horizons towards the Siege of Vienna.
6mm Baccus Medievals