War of the Roses

November 07, 2011
Taking a trip in the opposite direction this time, I just finished basing some of the Baccus 6mm War of the Roses miniatures I have had kicking around.  I have been painting various "Age of Knights" armies over the years, and I wanted to try 6mm to get the appropriate feeling of 'mass.' for larger battles.  The Baccus figs paint up quickly and look far superior to any of the similar Irregular miniatures figures I've purchased in this scale.  For my infantry I am leaning towards 1.75"x.5" bases with four stands per unit.  I am putting 18 figures in three ranks for the rank and file, and 12 figures on the command stand to leave room for unit ID tags.  I go back and forth between using 3 and 5 stands per unit to get the right look, and am settling on 4.  I originally started collecting these figures with the intent of using them for Warmaster Ancients, but I am now somewhat undecided on rules for now.

I still am still deciding on the standards to use, so they look a little sparse for now.

For the archers, I am still looking for the right balance and distribution of figures.  I am leaning towards 8 figs per stand in open order or perhaps in arrowheads like the onld warhammer fantasy rules.:


I am trying something similar with the crossbows, if only to leave a little space open for pavisse if I decide to add them.

I am organizing the cavalry in blocks of three, with heavy knights mounted lengthwise as "shock" elements. 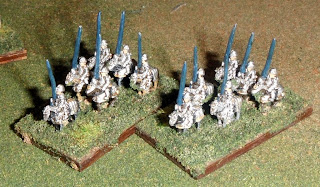 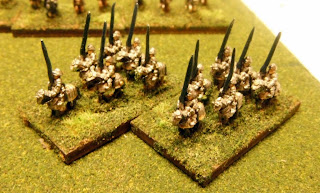 ﻿
The Men at Arms are arrayed with 4 figs per stand in a more open order configuration. 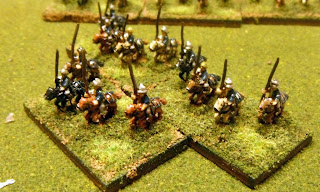 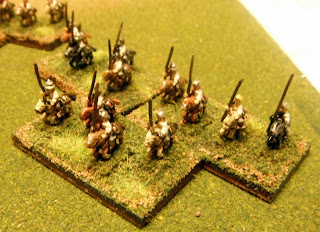 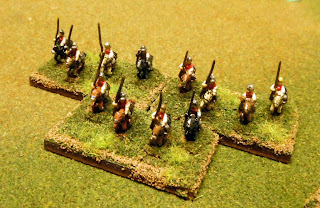 I am sure things will change when I decide on a good set of rules.  To date I have tried Warmaster Ancients, Days of Knights, Day of Battle, Warrior Heroes and Warhammer Historicals.  I still don't have one particular one that appeals to me....
6mm Baccus British French Medievals