November 11, 2011
Back to what originally inspired this blog, I have some of the many 6mm Napoleonics from Baccus and Adler.  I picked up the Adler figs from Stone Mountain Miniatures.  It can be a rather harrowing experience as the site is very basic and you pay by paypal "into the void." You really don't get any feedback until the figures arrive.  I did, however, get everything I ordered in about 4 weeks.  The Adler miniatures a very nicely detailed and I prefer their generals and personalities over the Baccus equivalents.  That said, the rank and file minis require a lot more handling and fiddling to mount, so I use Baccus for just about everything else.  The only exception being the Imperial Guard as they Adler figures just look so much more detailed and appropriate for the 'premier' formation for any French force.  I have about half the figures I need to represent the Guard, so they have not yet been presented before the brushes.


I have the units formed into divisions with each regiment represented by 1-2 stands (Roughly 1 stand per 1200 men)  The infantry divisions are configured with 3-4 Ligne Regiments and 1-2 Legere each.  I  use a single stand w/ 4 gunners to represent the divisional artillery and a single mounted general as the division commander.  Some units have Grenadiers in Shako and others with Bearskins.  Most units also have 2-3 Skirmishers mounted to the front, although I've kept a few as two solid lines just for the aesthetic appeal.  Long term I will have to mount some in assault columns if only because it seems right....  These are on 60mm x 30mm bases and I may mount a few on 60x60 bases just to justify the expenditure of units solely in column. 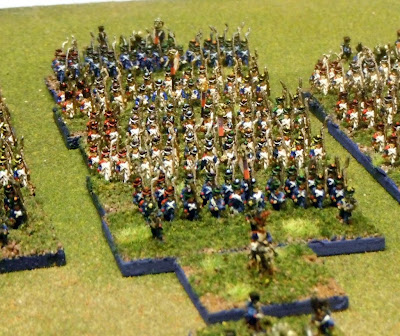 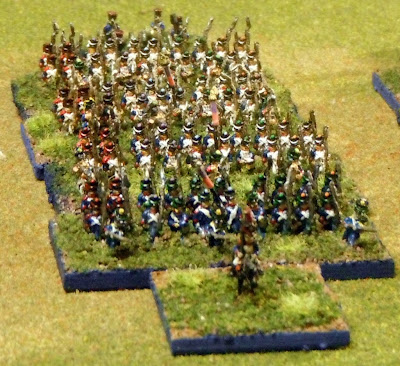 I also have three stands of converged grenadiers to represent Oudinot's division.

And of course, the Cavalry 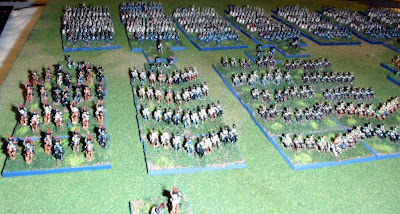 I've differentiated my cavalry by basing the lights in groups of 7-8 figures in a checker board and the Mediums and Heavies in groups of 8-9 in a flying wedge.  I am representing the horse cavalry with 3 gunners per stand, at least until I find some decent cannon to represent different bores.

The Currassier appear, on closer inspection to be carabineirs and thus will be getting an appointment for  a makeover as soon as enough Regular Currassier are painted to take their place.  Currently I am basing all of the Generals in groups of 1,2,3, or 4 (Depending on command level) on 30mm squares, but I am considering rebasing on 30mm round bases to help differentiate them further.  Next up, my Austrian contingent...