November 11, 2011
For the other side of the table I have amassed my Austrian Host.  Most of these are going to be two to three stand regiments with Yellow Standards reflecting the primary stand and white for the secondary.  The majority have Shako, but I have an additional 24 regiments worth of helmeted Austrians waiting in the wings for final shading and basing.  Again these are primarily Baccus figures with a few Adler interspersed primarily as Leaders, Cavalry and Skirmishers.

I need to get some other closeups, but for the Landswehr I've opted to use the Baccus Austrian Jaegers in Korshut and helmets to represent them.  I basically do a 'skirmish' base that makes them very apparent on the battlefield.  For my Grenze units I basically just use the Austrian Line infantry in Shako with the Bayonets trimmed off and 4 skirmishers in front of the line. 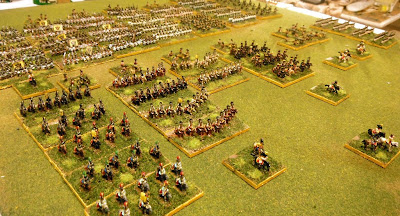 I have to re-take most of the infantry close-ups, but one that did come out well are my Combined Grenadier battalions.  There are three done as German infantry and 1 done as Hungarians.  I havn't added the standards yet as I am looking for source material, but I am leaning towards using the white standards.  The painting guides on the Blunders on the Danube blog have been invaluable in providing me with painting guides for all my Austrians and Frenchmen. 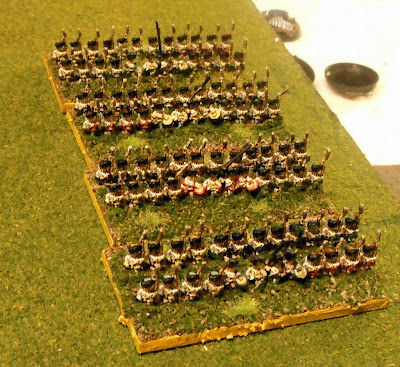 Here is a god's eye view of the army.  As you can see I have based most of them as Sk0 to make them visually very different from the French.  In addition, I have color coded the bases with a Golden-yellow to differentiate them from the French Blue. 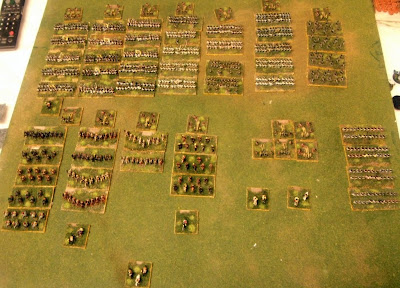 My Cavalry contingent is currently smaller than their French counterparts, but that should change by years end.  I have mirrored my basing scheme for the French by basing the Mediums and Heavies in Line and the lights in a staggered formation.  I've tried both lines and "V' formations and have found I like the appearance of the more dynamic formation. 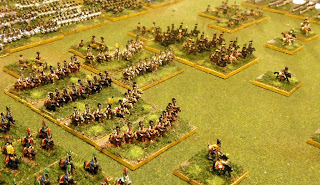 A smattering of Hussars.  The ones in back are some of the earliest I've gotten, and thus haven't gotten re-based. 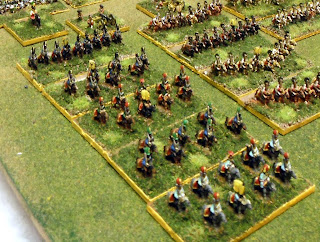 And here are a few Heavies and Uhlans.

Some additional Commanders and Artillery Formations.  I've tried to leave gaps in the back of the ground cover in order to add labels later.  The command figs are almost all Adler as I really love the crisp detail. 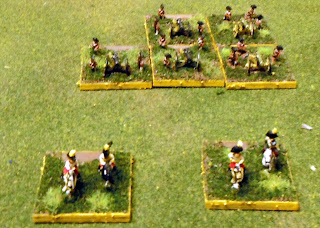 And my best approximation of the Archduke so far. 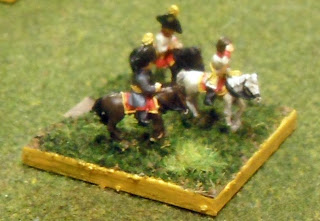