Following up from the last update (and a total aside, only I appear to be interested in...)  Here are a collection of models from the Brotherhood of Steel faction.  This is a para-military organization in the game bent on recovering past technology to keep it out of the hands of the rest of the untrustworthy people in this world.  Their big hitters are in Fallout's version of power-armor with lots of laser rifles all around.

These are all resin models, a material that is fairly new to my collection.  The detail is far better than any plastics, and most metals, that I have seen.  This allows for more realistic proportions in physiques and weapons.  While this is nice, it also means there are a lot of very thin, fragile joints and barrels that are just waiting for their opportunity to snap.

Another interesting aspect of Resin is that they seem to require significantly more focused washing and prepping before applying the primer.  I usually rinse my metal figures with warm water and  a little dish soap to clean off any residue for the release agents used by the casters.  With these, I need to give them a more thorough cleansing a soft bristle tooth brush (go light as weapons & limbs can/will snap).  I found this out repeatedly as I watched my brush primer pool and bubble rather than adhere to the surfaces.  I found that I am favoring brush primer since it gives me more control over the coverage in the more detailed areas.  (These figures are ridiculously over priced , so the last thing I want to do is ruin them with a primer accident as I doubt they would survive the attention required to remove it.)

A nice addition to these models is the scenic bases done for each one. I tend to start by painting these completely, and giving them a coat of matt varnish before I attach and start on the models themselves. 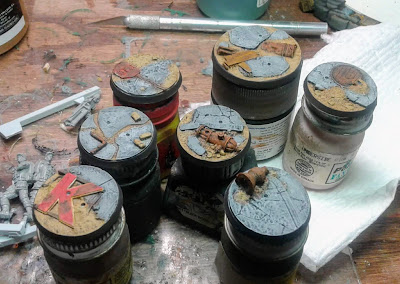 Most of the bases are a mix of AP Dungeon Gray and Desert Yellow with GW Contrast paints used as heavy washes.  I opted to change from using black on the base edges to AP German Chocolate-Brown and find it gives a much nicer blending look on the table-top.

For the power armor figures I am using a base of AP Gun metal washing with GW Contrast Gray. This really works well to knock down the silvery sheen and give it a worn appearance.  I can then dab on some of the GW Corrision paint around the areas where water would tend to pool and then hit it with some light rusting effects. 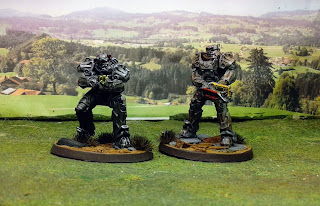 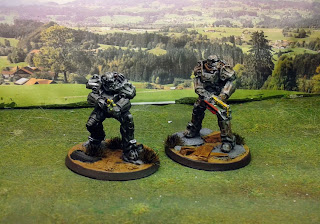 I took the same approach with the armor on the foot soldiers with the addition of a darker orange for the jumpsuits they wear under it.  I washed the armor with a thinned mix of the same gray, which really pulls down the tones overall. 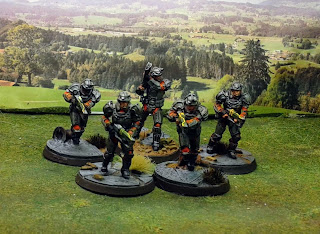 You can see the effect much better here on the 'lancers' who don't have the armor over their coveralls. These are supposed to be flight suits, so they look good in the oranges favored for Air Defense pilots back in the cold war. (The assumption being that pilots shot down over the US would want to be found quickly rather than blending into their environment.) 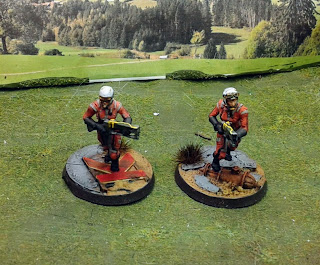 Lastly I did the 'scribes' with a mixture of greens (two colors from the Team Yankee US paint set)  washed with GW militarum green. The sweaters are AP Dragon Red with 1 wash of contrast BA red followed by Basicallum Gray. 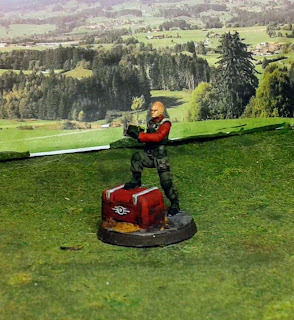 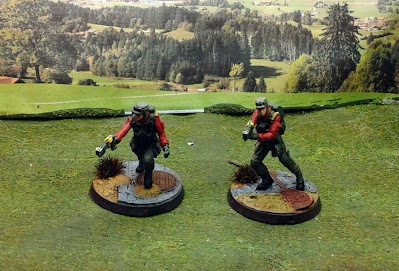 Overall fairly happy with how these models turned out.  The nice part of these small figure count skirmish games is that they do allow for a little of experimentation with color selection and painting methods.  I am already planning a few upgrades for the next set of minis I do for my cold war/ Chechnya project.

After posting this, it just occurred to me that this is officially my 1000th update since starting this blog.  Wow, never thought I would keep it going this long.  Thanks to anyone who is actually still reading my mad ramblings after all these years.  Cheers!