The Road to Ruin 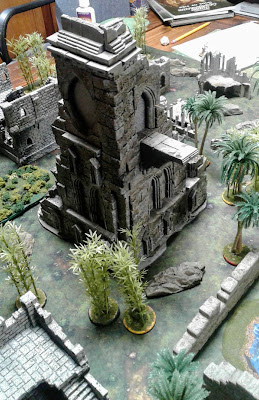 This year's foray into Adventure Games like Rangers of Shadowdeep and Frostgrave: Ghost Archipelago has really forced me to up my terrain game here in the den.  Both games are skirmish scale affairs where hindering terrain is really necessary to promote maneuver and provide diverse gaming experiences.  To that end, I secured several inexpensive sets of 3D-printed Ruins from both Etsy and Amazon.com.


The models are very light and durable.  They required a little cleanup in terms of light wash and scrub followed by dealing with any imperfections.  Fortunately these are ruins, so they tend to be much more forgiving in terms of imperfections in casting. 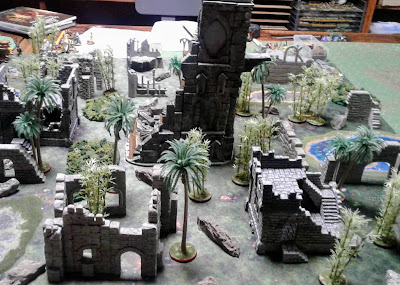 For painting I primered each model using a light grey 'chalk' spray paint.  I then went over them with a mix of brown and black thinned acrylic inks and washes.  This helps pull out the detail as well as give a better weathering effect.  Finally I did a light drybrush with grey paint. 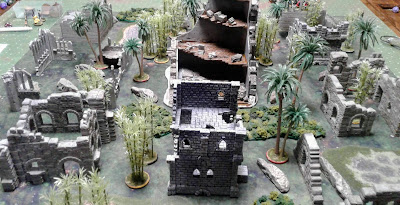 The tower is the only exception from the group.  One of the Ghost Archipelago scenarios called for a ruined 6"x6" by 12" tower as the centerpiece.  I didn't have anything appropriate, so I decided to try and make one.  The core is just some 1/4" plywood I cut in the shop and shaped with a jig saw.  The stonework is a mishmash of leftover Hirst Arts model pieces from an Architecture unit I used to teach in the early 2000's.  I had a drawer full of these leftover chunks cast in dental plaster, so I just started assembling an appropriate facade.  Since the tower is supposed to be in a state of collapse, I didn't have to worry too much about keeping the brickwork neat.  The finished product is a workable model, but fairly heavy.  (Even the floorboards are cast plaster)
If possible, I will plan on drilling s few holes in it for windows and arrow slits, but it works for the limited requirements it is under.

I am considering adding some moss and other overgrowth to the ruins, but that would limit their use.  Ghost Archipelago is a tropical game, while Frostgrave is polar.  I really don't want to try and collect two different sets of ruins.  I suppose I can bring out the flocking spray at Christmas?
28mm Rangers of Shadowdeep Skirmish Terrain