I continued chipping away at the Bad Squiddo Ona-Bugeisha kickstarter in April and managed to complete another five.  As noted with the last update, the quality of the sculpts is much improved although not on par with the Warlord games sculpts.  Unfortunately, it looks like those figures will be unavailable for the foreseeable future as  they are no longer available on the Warlord website and Warlord has divested themselves of Test of Honour.

The range is a rather eclectic mix of figures including models in full armor to a pair of children sparing with wooden swords.

the Hojo Masako model is in interesting piece as it represents the wife of the Shogun  Minamoto no Yoritomo the first of the Shogun after the Genpei war in 1192. She served as the power behind the throne for three Shogun in the Kamakura period.  She is also one of the few miniatures sculpted with a scabbard.  She is pictured below with an armored Onna-Musha with two katana.

Finally I have "Yumiko" in casual dress with the spear she used to catch her dinner.  (The fish hanging from the haft)


Lastly I finished this Test of Honor onna-bugeisha with Katana.  Another nice sculpt, and the only sword armed figure in the set. 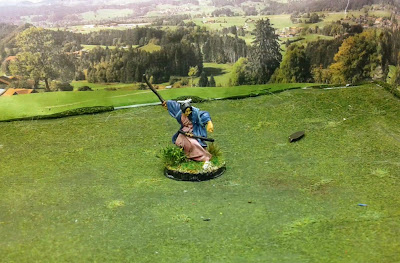