Another major milestone achieved!  All of the planned Dragoon and Cuirassier units are now complete.  I purchased two packs of Blue Moon Russian Dragoons and a singe command pack, which provided enough figures to complete three 12-figure regiments.  (I basically use 2 stands to represent 5 Squadrons).  I only needed two Dragoon regiments, but all but two of the Russian Cuirassier units were actually equipped as such during this time period (the 3rd Cuirassier and Prince Fedorovich Cuirassiers).  The remainder were conversted Dragoon units that were still using their old kit.  Thus the third unit became the Kazanskiy Cuirassiers.
The Russians continue to be a fairy easy army for mass production as the only differences in across the Dragoon regiments are the standards.  Otherwise the uniforms are all the same.  I am sticking with my color coding plan by using a mid-tone brown for all the Dragoons to make them easily distinguishable from the heavy (Dark Brown) and Light (Tan) regiments.
The blue moon command group comes with mounted drummers, which necessitated me moving them to the outside of the densely packed bases.  The drum sticks out too far otherwise and breaks up the line.

This additions means that Gaugreben's Cavalry Division is now complete, and Demiku's Brigade is only lacking the Horvat Hussars.  I think I actually have more stands than are necessary as the Russians only fielded 25 Squadrons of Cuirassiers and Dragoons.  I am planning to represent the 10 squadrons of Breast-plate equipped Cuirassiers with four stands of Cavalry and the 3 sqn regiments of Dragoons, Horse Grenadiers and Cuirassers with 1 stand each bringing the total up to 9 stands.  (That leaves five stands in reserve for adjustments to the OOB) 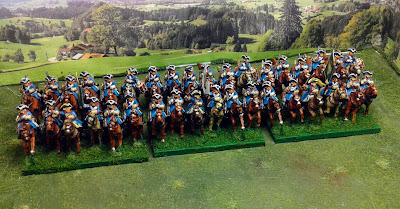 I still have no plans to add any Cossacks into the collection for Zorndorf as I can't find any record of their adding meaningfully to the conflict.  If we opt to change it, then that will require a significant increase in my output.  (Most OOBs put them at 6-8 regiments or about 30-50 more figures to paint)


I have all the figures I need save 12 Observation Corps Musketeers (Eureka ran out)  and an adequate substitute for the Observation Corps Grenadiers.  Otherwise everything is in various states of progress.  All of the Division commanders are complete.  As for the regiments, working from Right to left:

In Progress:  2 regiments (20 figures) of Eureka Hussars for the 1st Serbian (Horvat) hussars.

Still looking like I might just make it.  I moved the sequence around to finish off the cavalry and Browne's division sooner as Jon has painted some Musketeer regiments of his own that could be used in lieu of the outstanding regiments from Saltykov's division should something go awry.
18mm Blue Moon Honours of war Russia SYW Zorndorf