Tradition dictates that I follow up the annual review with a statement of my goals for the year to come.

So how am I trending? 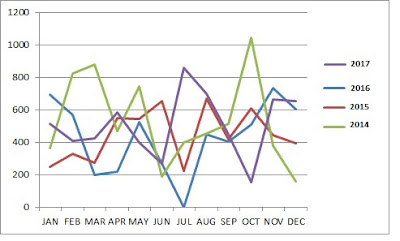 Overall, production seems steady.  This year I seemed to buck the trend of tailing off over the summer, with July being my most productive month rather than the lease productive.  I maintained the trend, however, and October became my lease productive...  I will attribute this to my trip to Vermont for now.  I managed roughly 6000 points equivalent scale, which puts this as an average year.  I managed to exceed my expectations on units completed, and that was primarily due to my divergence into 3mm Cold War over the summer.

Looking at my productivity versus projections I did fairly well, with the 28mm projection bang-on.  3mm was not even on my radar last year, so it kind of jumped in to dominate the 2nd place position. 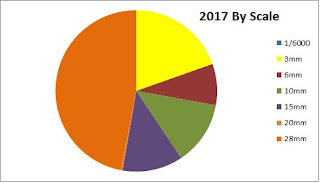 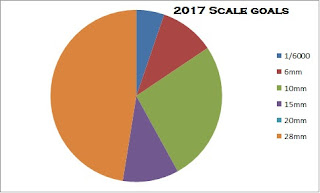 For this year, I know I have about 2000 points worth of SYW Russians to complete for the planned Zorndorf games this summer.  Since I normally paint around 6k worth of figures, that will be about 1/3 of the production.  Similarly I want to get the lion's share of the 10mm SYW units completed and that will be a similar chuck.  Looking at the remaining 28mm Kushite Egyptians on the pile it looks like I will have little room to tackle more than a few 3mm and 6mm units.  (This is of course assuming I don't start another project.  That is, of course, a terrible assumption base on my past record.


The stated goal for the blog is to help me whittle away at the lead pile.  So how did I do? 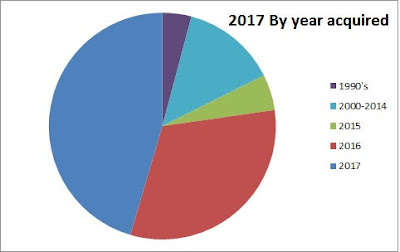 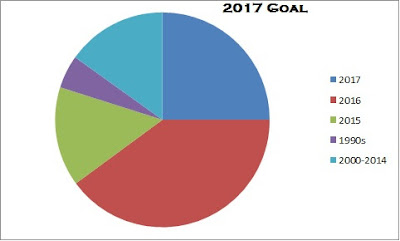 Not so hot, I was comparable in chipping away at the ancient stuff, but I truly failed to keep my commitment on the new acquisitions. This was due to my diversions into 3mm Cold War, 28mm Ancients and the SYW projects.  On the plus side I have most of the figures to complete those projects purchased, so it will be easier to avoid new purchases as I clear those backlogs.  (insert incredulous smirk here....)


Knocking out that backlog will make the 2017 figures dominate.  I still want to complete my Imjin War Koreans which will bring the 2016 numbers up as well.  That said, I am sure that I will find something else to interest me as I get closer to the end of my Old Glory Army membership.  We will see what 2018 brings.

Here are some specific goals for my many projects:

28mm Imjin War - For this group I just need to finish the on-hand heavy units to complete the collection.  That will be 4 units of heavy infantry, 2 units of cavalry and 1 more unit of missile troops.


28mm Samurai - I have a lot of foot samurai on the table waiting for attention.  This year I want to focus on getting more Samurai and less Ashigaru completed.  Warlord is planning on doing some Sohei to add to their Test of Honour range, and Dice Bag has done some very nice female models that will probably make up part of my 2018 planned purchases.


28mm Kushite Egyptians - I have 8 units of cavalry/chariots and 6 units of missile troops on-hand.  I would like to complete 6/6 for this year.

28mm World War II - If I do start another project this year it will probably be 28mm British Paratroopers to replace my 20mm collection.  Otherwise I really want to get some vehicles to mount my Panzergrenadiers.  I should probably pull off a couple tanks as well.

28mm Cold War - 1 Soviet Tank and crew.  I think I have some other crew-served weapons on-hand, but no new purchases are planned.

18mm Seven Years War Russians - See the tracker on the right column of the blog.  I have about 16 Infantry regiments and 10 Cavalry regiments to go.  I am focused on the figures on-hand in the vain hope Blue Moon gets around to adding to the range before I start painting command groups to go with my summer uniform infantry.  Otherwise it is command units in full coats to accompany their much more comfortably dressed soldiers.  Either way, I want to get it done by the end of July.

10mm Seven Years War  - I want to get enough Prussians and Austrians completed to have a go at Kolin, Mollwitz and Leuthen by the end of the year.

10mm American Civil War  - I need to do enough figures to round out the existing five brigades for each side, and double the amount of cavalry.  Most of the figures are on-hand.

6mm Ancients - I have really neglected 6mm of late, and I have a large bag of late Imperial Romans waiting for attention.  I want to finish off enough units for a Commands and Colors sized force.

6mm Napoleonics - Not much to do here.  My goal for this year is to paint enough Heavy cavalry figures to increase my unit stands from 9 models to 12.

3mm Cold War - Not much here as well.  I need to round out the engineer components for the USSR and US armor brigades as well as the Rotary Wing Assets.  (Hinds and Cobras)  This is another possible area for expansion as I would really like to add a BOAR armored unit at some point.

Odds and Ends - I have lots of 6mm terrain and odd units that I would like to complete.

Probably the biggest change for me in 2017 was the number of games played.  Setting up the near monthly "Friday Night Fights" with Jon really allowed me to get figures (mostly his) out on the table again.  This also provided the needed motivation to do more painting.  My overall goal is to maintain the same number of big games, but focus more on using the same sets of rules.  The best part of playing Jon's Risorgemento and Honours of War this year was that I didn't have to spend a lot of time learning new rules.  I want to try and get the existing projects out on the table more to justify their existence and inspire my efforts.  Coupled with this is a goal to actually host some games in my own den.  I would like to try and get some non-family people over this year for at least two games.  This is sort of a challenge given geography, but a boy can dream.


with that, my goals are made apparent for all to read and criticize.  Now all I have to do is realize them....