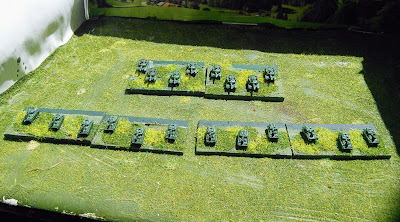 The 3mm project expands to the US Army.  I opted to start with a cavalry formation, because cavalry is awesome, and everything else can be lumped into the lesser category of "ain't cav"  I am aiming for a mid-80's look for my collection, which meant going with forest green as the basic color.  (All of the M1 (IP) I remember from the early 90's were still in this color)  This also helps them stand out from the Bundeswehr minis I did in NATO 3-color. 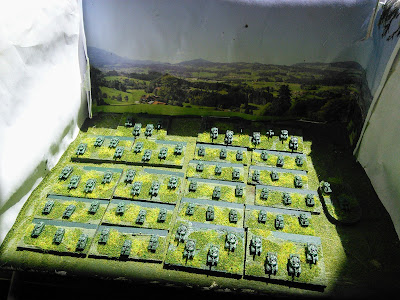 This represents a single Armored Cavalry Squadron, which is essentially a battalion sized formation.  It also highlights the difference between NATO and WARPAC formations.  A WARPAC armor battalion fields between 31-40 tanks while a US Armor Battalion has 58.  This group represents a post 1986 cavalry group with 3 troops of 9 Tanks and 13 M3 CFVs and 1 Armor Company.

The M3s were actually organized in platoons of 6 vehicles, but were used in the scout role, so I based each platoon as two separate sections on recon bases.  This also makes them easier to distinguish for M2 Infantry Fighting Vehicles which use the same vehicle type.  (M3s carry more missiles and fewer troops)  The tank models are a mix of M1 and M1A1, but at this scale, I am really not worried about aesthetic details like the length of the sponson boxes.  The BN command stand is on a 60mm Oval base as I am still trying to find the right size to use for BN HQ bases.

I completed the rest of the US models in the lead pile, which provided enough Bradleys to do 1 more scout platoon and five platoons of M1s to get the start of an Armor Battalion. 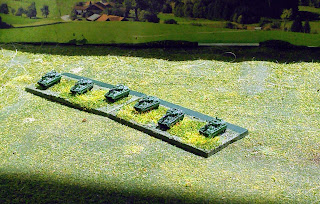 I plan on doing more of an ad hoc Brigade task force for the US side with an M1 Armor Battalion, 1 of M60A3s, and at least 1 INF battalion with M113s.
3mm BCT Cold War picoarmor US Army