I have been working on a set of rules for Cold War era West Germany of late(More on that when I finish the latest update for my Operational Design Series), with a focus on creating games for Brigade level commands.   I took out my 3mm "practice set" of Russian and West German tanks and was disheartened to see them generally chipped and in poor condition.  I have long considered trying to use Pico armor to do the same platoon level stands I use for MSH with 6mm figures, only with the correct number of tanks.

So a little upgrade project was initiated.  Seen here are the first few fruits of my labors.  I opted to upgrade from 1.25" stands to 1.5" stands as they look less crowded.  (Especially with the larger Leopard 2 tanks).  In designing the units I decided to play around with a few of the ideas I had kicking around for my rule set.  First up, no company headquarters or models yet.  Instead I am adding the fighting platoons only with a Brigade headquarters mounted on a 1.5" round base.  The goal of the game is to play at the brigade level, and I want to see if this helps pull the player out of the weeds a little bit.  Secondly, I am integrating the Air Defense, Mortar, and Artillery assets onto the command stands.  (for much the same reason) .  Finally, I am going to try an mount infantry separately from their carriers, as they tend to vanish at this scale.  It also allows me some dual use as the dismounts can also play the role of an infantry battalion in a pinch.

For the Motor Rifle battalions I am still missing 1 platoon each for the AG-17s, but they will be made up in time.  As it stands, I have enough models completed to do a battalion each with BMP-1s and BMP-2s.  I should be able to put together enough additional BMP-2 to finish off the 3rd battalion to field the entire Motorized Rifle Regiment.  In the same spirit, I plan to do another tank battalion so I could just as easily field the unit as a Soviet Tank regiment.


I also managed to complete the start of a regimental Anti-Tank company with enough launchers and command vehicles to do three complete platoons. 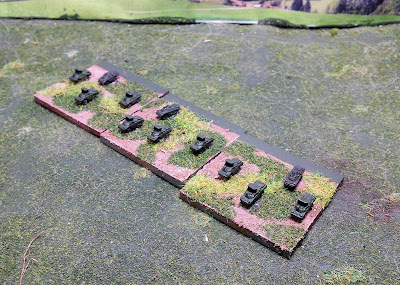 For the command stands, I am envisioning using large round bases with a few command vehicles plus other models to represent add-ons like Mortar platoons, Air Defense Platoons and Artillery forward observers.  I plan on playing around with the ideas like using additional models to represent the unit's overall status and capabilities.  More to follow.... 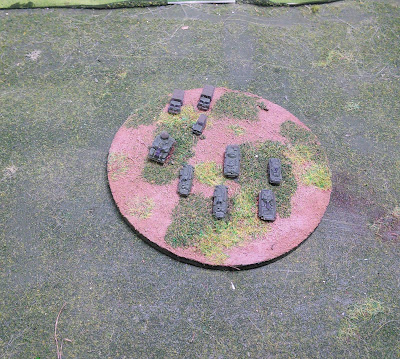 I have some more models to finish for this side, then it time to upgrade the Bundeswehr Panzergrenadiers.
3mm BCT Cold War Modern picoarmor USSR