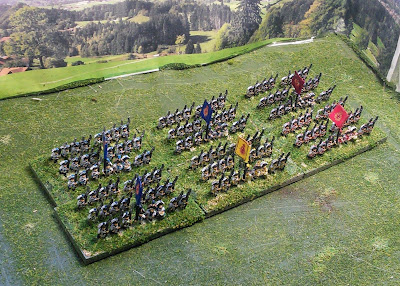 A long month without updates, but some progress at last!  Six regiments of Saxon line infantry ready to form the core of my brigade.

The minis are 1806 Prussian Line infantry from Baccus.  I used Peter's painting guide to select my regiment facings and colors.  Basically all the models were primered in white and then the fronts and pompoms were painted in a regimental color to offset them.  I used a Soft tone wash to keep from making them look too muddy, and went back with white highlights.  The flags were taken from the Bacus Saxon  flag sheet.  I also added a red edged Leibfahnen to my converged Grenadiers, but neglected to take a photo.   I found that the colors on the flags cracked easily, so I went back in and touched up all the primary colors with inks.

The regiments are from left to right. 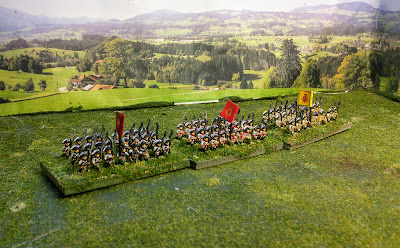 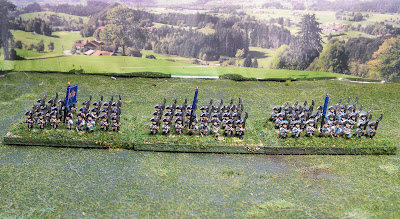 Admittedly, I selected these regiments primarily for the diversity of colors it allowed.  I inadvertently did two dark blue facing elements instead of a green regiment (IR#7 or 8).  I suppose I will remedy that if I find a scenario requiring more than six line regiments.  This completes all of my planned infantry units for the collection, however I am going to do the Leib-Grenadier Garde just because they look cool with their red jackets and yellow facings.

I also took the opportunity to knock out the last two guns I have planned for this group. 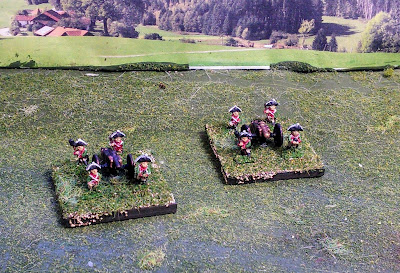 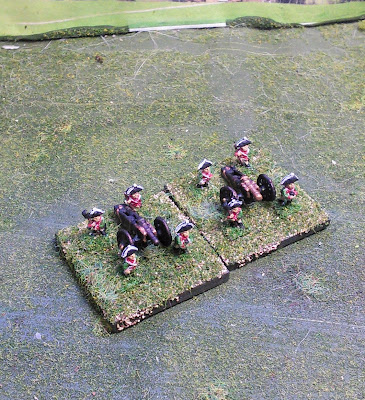 With that, I am dangerously close to actually getting this force done!

The cavalry units and Grenadiers are already on the table.  I neglected to order any figures for the command groups, so I suppose I will need to second some Austrian commanders to the job.
1809 6mm Baccus Napoleonics Saxony