Wait, did I actually paint Saxons? 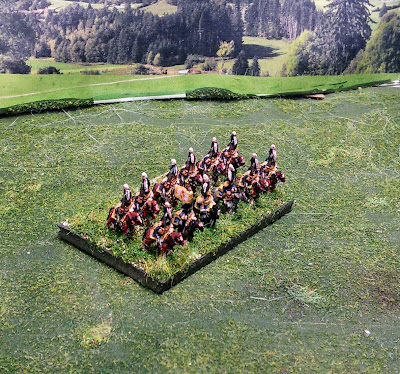 So, two and half years after purchasing them, I am finally getting to the last contingent for my 6mm 1809 Project.  You know, the one that started this entire blogging experience?  I decided to start off easy with the Saxony Garde du Corps heavy cavalry regiment.  The figures are actually Baccus Prussian Heavy Cavalry in Bicorne, but they make excellent proxies at this scale.  I have decided to increase the figure count from 9 to 12 to help my heavy units stand out on the table. (Eventually I will plus up my Austrian and French units as well).

I opted to do all the rank and file horses in cavalry brown, with different colors for the commander, guidon and trumpeter.   At this scale, most details are lost, so I tend towards using darker horses for the Heavy cavalry and lighter ones for the Light cavalry.  (With a mix for the Dragoons)   The coats are a simple buff with red collar/cuffs and a bit of yellow across the chest.  I need to add a touch of green to the flag to represent the laurels on one side. 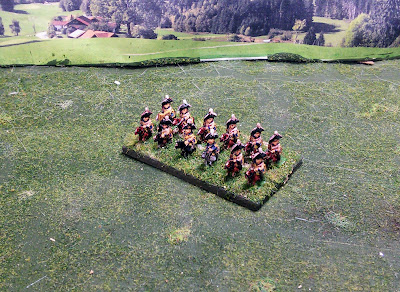 I have several other units nearly complete, and if I can maintain the press, I may even get this project compete over the next six weeks.  Having said that, I of course completely jinxed it.

I am using Peter Anderson's 1809:Blunders on the Danube scenario book as the basis for my collection, and am using Baccus' Austrian and Prussian lines for figures.  I want to be able to do both Razyn and Bernadette's corps for Wagram, so I have boiled down this contingent to the following:


I use 1 stand= 1 regiment, so I have some figures left over.  My plan is to do one additional stand of Grenadiers for the Leib-Grenadier Garde in their distinctive red and yellow coats, another stand of Skirmishers and probably a couple extra stands of cavalry (1 Heavy, 1 Chevauleger).