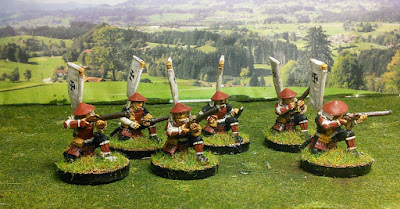 The leader of the Japan's 1st division, Konishi Yukinaga was unique in being one of the few Christian Daimyo in Japan.  He was somewhat impetuous in the early stages of the war, and launched his attack as soon as his force landed (rather than wait for reinforcements).  This infuriated the second divisions commander, Katō Kiyomasa, stoking an intense rivalry between them.

For the unit, this really only means that I had an excuse to do one of the known Christian Mon on their sashimono.  These figures are from the Perry Range and are actually modeled with Sashimono, rather than needing to be drilled and pinned. 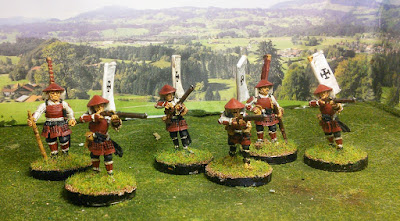 The color pattern is less historically based, then I wanted to try and get a 'russet' effect for the laminar armor.  I still playing with armor colors and lace patterns for the samurai and the Ashigaru give me the opportunity to create little "Islands of Uniformity" amidst a sea of multi-colored samurai. 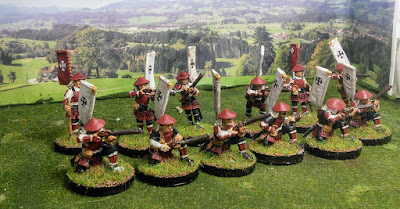 The Perry Figures do paint up quite nicely, and are much more rugged than my Wargame's Factory plastics.  I am considering exploiting the release of Warlord Games (The current owner of the plastics range) Test of Honor rules to sell off the plastics in my collection to fund more Perry figures!
28mm Imjin War Lion rampant Perry Miniatures Samurai