Yet another holdover from the January freeze.  This guys constitute the second half of the handgunner detachment for Kata Kiyomasa's Second Division.  This gives me a total of 24 Yari and 24 Teppo in this scheme which allows for 4 units in Lion Rampant or 4 stands of Medium Infantry and 4 stands of missile troops for Impetus.

I am running short of plastic sashimono from my Wargames Factory boxed sets, so I opted to only sprinkle a few through my two handgunner units.  This is also because the Perry castings don't have plugs in them for mounting Sashimono (at least these castings....), so I needed to drill them out to give them stability.  The decals are from the Perry collection as well, and are proving to be the best of the companies I have tested.  Unlike products like Warflag, the decals are individually set rather than integrated into a single sheet.  This allows for a smooth transfer without a lot of trimming. They also lie flat on uneven surfaces without the need to slit the sides to prevent bubbling.  I just with Perry would do sets for some of the big players in Japanese history rather than just Kato Kiyomasa and Maeda Toshiie.   Sticking with the Imjin war  it would be nice to have Konishi Yukinaga's 1st division.  For the larger Sengoku period Takada and Uesegi stand out (especially as Perry's SAM1 code is Takeda Shingen, and SAM2 is Uesegi, Oda and Date) 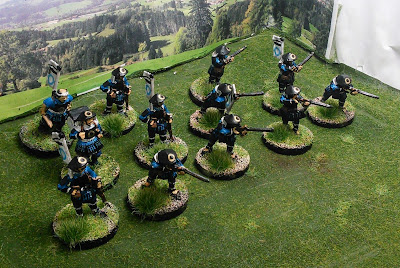 I still have another 12 Perry castings (these with Sashimono) to go, so I am planning on trying out a radically different pattern with them.  Either some of Konishi's Christians or perhaps some Oda forces.
28mm Imjin War Lion rampant Perry Miniatures Samurai