You down with OCP? Yeah you know me. 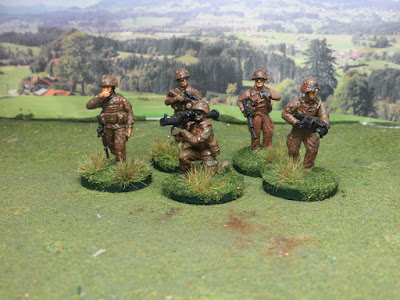 First up, this is not a new era.  I picked up a few 28mm Modern US and USMC figures awhile back, and decided I would give the new Army OCP (operational camouflage pattern) a try.  I personally despise the Grey UCP pattern and welcome a return to something that doesn't look like your grandmother's couch.

For the pattern I went with AP Fur Brown as a base, with stippling using VJ English Uniform, German Camo Light Green , German Grey-Black, and AP Skeleton bone.    The pictures are coming out much darker  than the actual figures.

First up, there is this stalwart soldier bearing the Nomex coveralls of God's own chosen: The armored vehicle crewman.  His taciturn expression marks him as a man of action, perhaps even a cavalryman!  He is obviously an Officer or Senior NCO as none other would actually be seen walking on unpaved soil.

I opted for a tan Nomex, although I should probably used sage to reflect a more temperate climate.  (I went with the one I had in the closet)  He is wearing an older LBV and no Body Armor (IOTV, he may have a kevlar flak vest on underneath), so he would fit in for most of the 90's and early 2000's 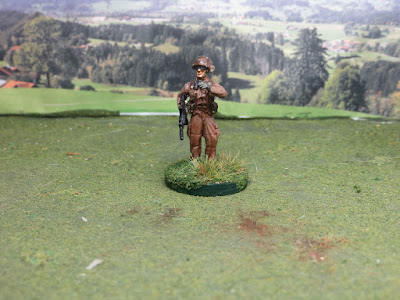 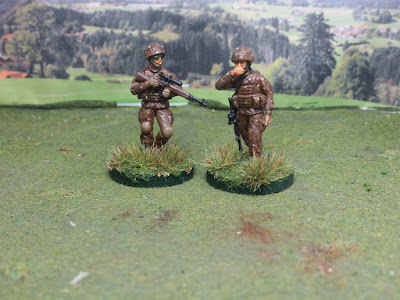 Here is  a section leader with his designated marksman.  These models actually have the newer IOTVs, which puts them post 2007-8.  The squad leader even has a MBTR radio on his back.

The last two are most likely USMC as one appears to be aiming a M3/Carl Gustav and the other has an M32 grenade launcher.  Both are used by Special Forces as well, so I suppose the army uniforms aren't too out of place. 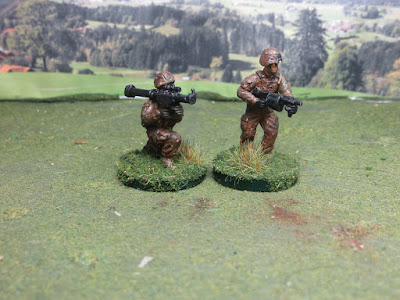 Also of note on these, is that the sculptor has gone through all the trouble of getting accurate details down all the way to the hose for a Camelbak.  That said, there is no pistol/M4 for either model, nor any way to carry ammunition for either system.