I have been playing with weathering powders a great deal of late, so I decided to use them to stimulate another stalled project.   In this case my 6mm urban terrain.


I've had a collection of GW's old Adeptus Titanicus terrain for sitting around for a couple of decades now.  This includes the paper and plastic buildings from the original game as well as these ruined building pieces for a later iteration.  I used them originally for microarmor games of "Tank Charts" to make some ruined urban areas for our Eastern Front WWII campaigns.  I had a long term goal of building up enough pieces to do a ruined city scape for microarmor and/or Battletech games, so I opted to give it a whirl now.  (I found some plexiglass sheeting while cleaning the shop that spurred the memory over the summer.)

The base for these are 5.25" acrylic squares with the plastic terrain pieces and basing material glued on.  I sprayed them with grey auto primer,then went over the ruins with various inks.  I followed up with black soot and red rust weathering powders and got a fairly decent result. 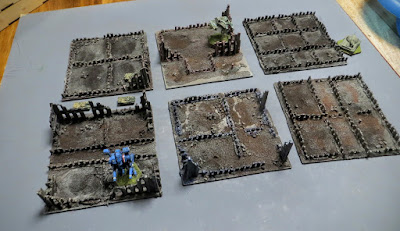 I like the modular approach of going block by block at this scale, however storage will be an issue.  I have several bins of unfinished 6mm city buildings, so I can potentially build enough to do a pre and post destruction 4' by 4' board with what I have.  So many projects, so little time I suppose.