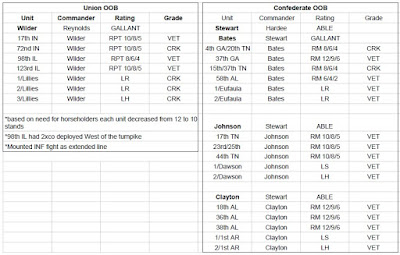 Following quickly on the heels of building the terrain board, I opted to try out the revisions to my Hoover's Gap scenario for Regimental Fire and Fury.


Looking at the layout from my TFP scenario book, it appeared that the 72nd Indiana was set farther back, than I had them in the previous battle. 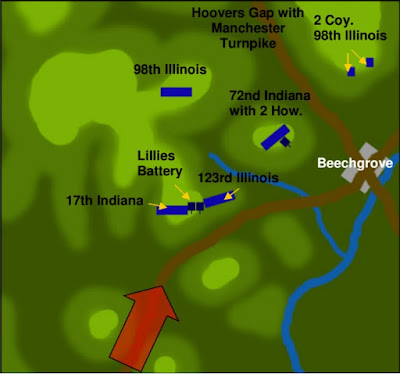 This makes it slightly awkward as the 4th GA/20th TN originally attacked their position first.  Given the ranges, it seems like that would require them to approach from East of the river, or spotting would need to be less than 12".

I opted to give Bates brigade a head-start onto the board, with visibility obscured by the hills between them and the Union position.

This had the downside of placing them within 16" of the Union line (musket range) almost from the outset.  This would make it a quick and violent affair.

I decided to have Bates focus on forcing the approaches to Beechgrove, while Johnson tried to roll-up the Western flank.  The two brigades established their artillery in supporting positions and moved into the assault.

The turn 1 fire proved to be indicative of early problems.  I managed to roll a lot of 10's and 1's in this game and the extremes degraded the value of the re-fight.  The 123rd went low on ammo, and would be crippled as a result for the rest of the game.  The combined fire from the confederates in turn 2 would also spread out the out of ammo markers.


By turn 4 the tide had completely turned.  The Union was loses stands 1:1 with the CSA and Wilder was lost to one of the frequent command checks.  The 72nd managed to savage the to 2 regiments sent against it, but the Union center and right would be hard pressed the entire game.

A charge by the 17th TN in turn 5 carried the position from the 17th IN, gutting the Union center.  The 123rd was spent, and the confederates made their roll to bring in Clayton's Brigade.  I decided to end the scenario there, and try a different approach.  The scenario seems a little too favorable to the CSA this time.
Here is an updated cheat sheet for those who want to give it a try or kibitz 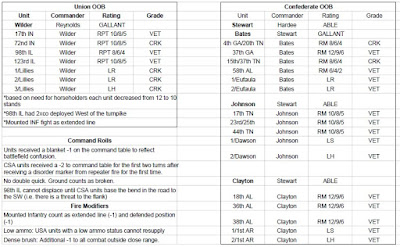