It's not all SciFi mecha on the table lately.  Following the updates I did on the Stockhausen 1987 project, I decided to expand my WARPAC forces to include some Motorized Infantry in BTRs rather than the purely BMP force I have used to date.  For these I used  a mix of WARPAC infantry packs from picoarmor paired with the appropriate models.  The first two battalions can seen above.  I did one using BTR-80s and the other with BTR-70s to see how the models look close-up.  Overall the BTR-*0 models have crisper details and a better look overall.  I will probably do another two battalions using the BTR-80 models to round out a complete MRR to supplement my existing Tank and BMP centric Regiments.

The units above are based on the 1.25" squares I use for both Modern Spearhead and my own BCT rules.  The only difference from the BMP battalions is the added AGS-17 (Grenade Launcher) platoons.  Those are mostly for MSH as I tend to integrate the specialty platoons into the command stands in my own rules and just have them provide combat multipliers.

This organization required 30 BTRs pure Battalion, so I did not have any left over for the command stands (yet)  I am going to pick up 1 additional pack of BTRs to finishing those off and also add some flair to my other command stands in the future.

I also dug some older OT-64 models out of the lead pile to create a few stands of Polish or Czech infantry to add to the force.  In this case, the infantry used was from an old Irregular 2mm model collection, so they are definitely more 'impressionistic" than event the 3mm models.  I had enough models to complete two companies of infantry, and then added an AT company including one platoon with the BRDM-2s and another with towed 100mm guns.  The towed guns includes the recon variant of the BRDM to reflect the spotter teams normally associated with these formations. 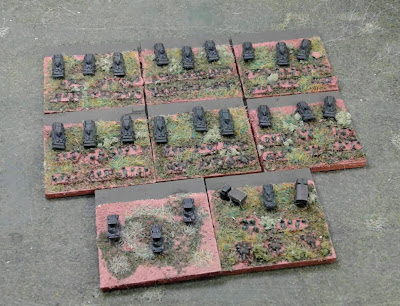 Lastly, the expansion to CENTAG meant a need for some more T-72s instead of the existing hordes of T-64s and T-80s I have for the GSFG.  To that end, I painted a Battalion of T-72s to round out the Motorized Rifle Regiment's armor contingent.  These can also serve as a Tier 1 addition to a Warsaw Pack ally instead of the T-55s I normally use. 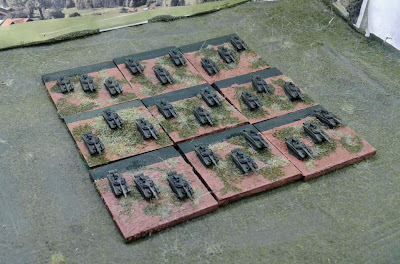 Always more to do with this part of the collection.  Anytime I think I am nearly done, I get those "What about a French Brigade?" moments that promise to leave it unfinished until the end of time.... 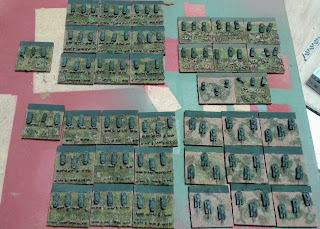