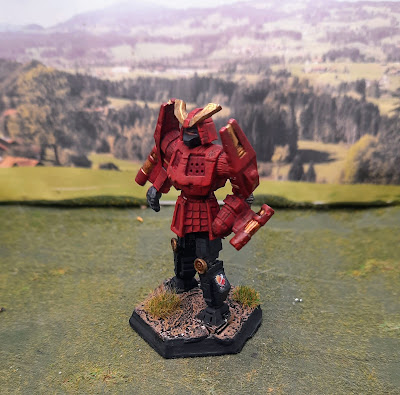 As mentioned in the last update, I picked up a new airbrush to experiment with various painting techniques.   I decided on a the double-action and owe so humbly named "Badger SOTAR (State Of The Art Results)" I also purchased the basic set from Army Painter's new airbrush series.  I've got to say I am quite happy with these as there is no need for mixing and meddling with the paints as they are good to go right out of the bottle.

My first few projects for the airbrush were some older Battletech minis.  The arrival of my Kickstarter minis inspired me to go through 30+ years of unpainted mechs to get some finally painted up.  I wanted to first try out how the airbrush would work for monotone applications, so I tried out some Kurita mechs.

First up were a pair of plastic mechs from the 1992 edition boxed set.  I did a basic grey primer than applied a monotone red shade.  Finally, I added a little yellow to the mix to get some highlights.  Lastly I gave them a wash of Nuln Oil to pull out some details. 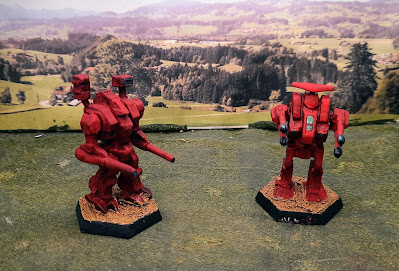 I was generally happy with the results, so I went on to try this on a metal mini.  This time it was a 20 year old "Hatamoto Chi" done in similar Kurita colors.  I have found the monotone red pattern on the "Sword of Light: regiments to be a bit dull, so I opted to take some liberties with the paint scheme to add in black legs.  Here I also tried to use the "Zenithal" technique of using a dark base primer with a white highlight before the based coat to simulate an external light source. 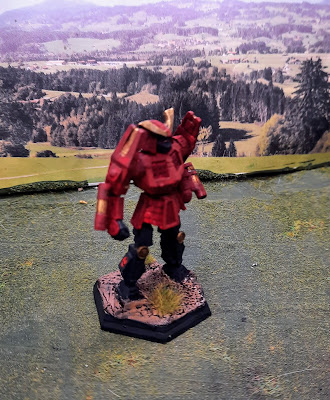 Overall, I didn't see a significant difference here.  I may have put the base coat on a little too densely to allow the lighter color to really show through.  More to experiment with here I am sure.
My next experiment was to try out some camouflage techniques.  Looking at the new minis I received from my Kickstarter Pledge, I hit upon the idea of trying a vintage MERDC pattern on some of the reimagined classic sculpts.  Vallejo actually produces an airpaints set for MERDC, and I do a lot of histroical minis for the late cold war period.  Thus we get this:

I did these patterns freehand using a Forest Green base and highlighting with US Light Green and much smaller stripes of Army Brown mixed with a little tan.  I layered in the basic pattern first and then went back in with each color to reduce the overall size of the sub color stripes by gently expanding the edges of the two primary colors.  Once I was happy with the results I used a 005 Micron pen to add in the small black gull-wing marks that are one of the hallmarks of the MERDC patterns.  Lastly an application of AP Dark Tone to help dull the transitions and pull out the panel details.

I like the color combination and the overall ability to pull out the pattern with the airbrush.  That said, the free hand approach gives very feathered edges to the paint scheme that seems more appropriate for doing the later NATO 3-color camouflage than the 70's era MERDC that tended towards harder edges.  For the next experiment I tried using plastic putty to lay in the stripes.  I have this is much more labor intensive, but did give better looking edges.  I will post those results when I get the patterns fully laid on.

That said, another interesting supply chain issue is preventing the finalization of many painted figures: I can't seem to find Winsor & Newton Matt Spray anywhere.  I have several cans on back order with Dick Blick who first reported it would be available in December and recently updated availability to January 10th.  I used the last few puffs from my rattle can with the figures listed here. I may give the airbrush application of dull coat a try, but I really have not found a flat spray that comes anywhere near the quality of the W&N stuff.