Dabbling with my BCT rules again, also had me considering the challenges of gaming the early war period.  I have been sitting on over a hundred models for early war France for well over a decade now.  I started my WWII micro armor collection decades ago with an interest in the early Eastern Front, that later morphed into a North Africa campaign.  In both cases, I was always frustrated by the emphasis on the technical aspects of the equipment over the operational capabilities of the armies in question.

The German 1940 campaign has always seemed to be a challenge as the Germans had arguably worse tanks than the allies and significant fewer of them to offer.  The French had already pioneered mechanized infantry with the Lorraine 37L carriers and half tracks which also allowed for better forward movement of logistics.  This makes it a challenge to model correctly as most players are reluctant to try fighting the war the way the French generals actually approached it.

With that end, I started modifying my BCT rules to work at the Division level for WWII.  My iniitial approach is to have 1 stand = 1 company sized elements with brigades made up of 9-15 stands + a headquarter group.   The first efforts are seen here.  The person I picked up the French models from was very pro-vehicle which means I have an abundance of Half-tracks, Loraine 37L carriers and especially tanks.  Thus I decided I could maximize the collection I had by building a French Cavalry division first, and then looking at doing an Infantry division later if I thought it was worthwhile. 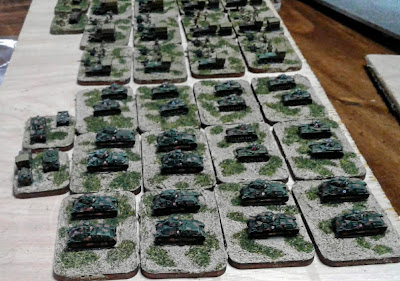 The result is what you see here.  Basically there are three stands to a battalion based on "Flames of War' medium bases with Brigade command groups on smaller bases.  I place one Lorraine carrier on the infantry stands to denote a mechanized company and on the gun stands to represent a 25mm AT gun battery.  The larger half tracks were used for the 75mm Infantry Guns and to denote the 47mm AT guns since the models are virtually identical at this scale. 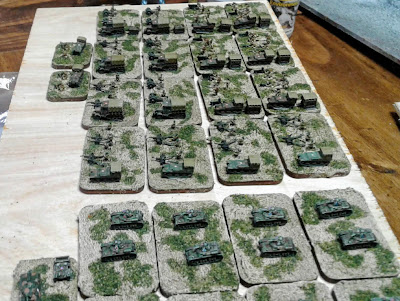 Going through my leftover German models from the North Africa collection, I also started putting together the start of Rommel's 7th Panzer Division.  Right now, that is just a handful of Panzer II's, 88mm Flak guns and a lot of Pz38(t) 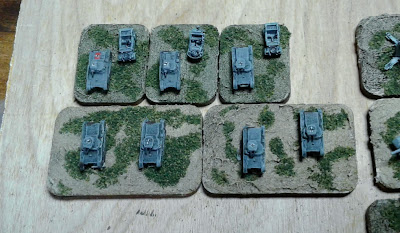 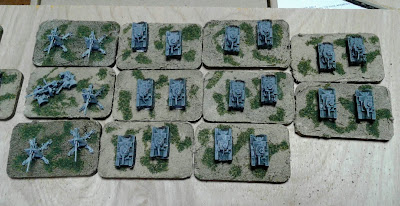 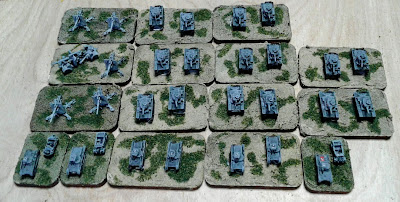 I am a long way off from fielding them yet, but it is proving to be an interesting incentive to tackle those unloved Panzer Is and GHQ infantry models languishing away in the lead pile.

Stay tuned for more mixed weirdness as I think I have WWIII Polish in 3mm up next....