One of the numerous hobby projects I have been working on is a set of simple Brigade scale rules for Cold War era engagements.  I took the opportunity presented by a lot of business travel in May and June this year to re-read the entirety of the excellent Third World War 1987 blog.  This is a rather exhaustive day by day story of the global war stemming from a Soviet Invasion of  West Germany in July of 1987.   The author (Mike) focuses on events across the globe, but with specific focus on NORTHAG and CENTAG in Germany.  This plays very well with my 3mm Cold War project where I have built enough models to field a Soviet Mechanized  Infantry or Tank division as well as a US Cavalry Regiment, Armored brigade or even a Bundeswehr Panzer Brigade.

It was this paragraph from the CENTAG update for D+15 that provided a flash of inspiration:

1st Armored Division’s attack met stiff resistance as well from the 11th Guards Tank Division. The Soviet division’s forward regiments were deployed in depth. Their initial defenses were not penetrated until around 1200. Within two hours much of the division’s MRR had been enveloped south of Stockhausen. A counterattack made up of two tank battalions hit the Americans later in the day to break through to the surrounded motor-rifle troops. It failed to reach them, however, it was enough to slow the US advance and force 1st AD’s commanding general to commit a second brigade to the fight.

In the story, the Soviet 1st Guards Tank Army has been stopped West of Fulda, and establihsed a hasty defense while follow on forces are brought forward.  The V Corps commander takes the opportunity to launch a limited counter attack using his freshly REFORGED 1st Infantry Division and elements of the 1st Armored Division sliced to him from US Army VII Corps.  Rather than the typical "Red Horde Sweeps West" scenario, this is actually two reinforced US Armored Brigades attacking depleted Soviet divisions on the defense.
I opted to focus on the fight between the 1st Armored Brigade and the 11th Guards Tank Division (GTD).  I have the models to field an Mechanized Rifle Regiment (MRR)  and enough additional Tank Stands to reflect the possible reserves.
For the American Side, I had already built a US Armored Brigade for this time period. At least I thought I had...  More about that in a moment.
Next I took a look at the map.  Using Google Earth I took a snapshot of terrain around Stockhausen today with the understanding that is would be relatively similar to what it looks like today. 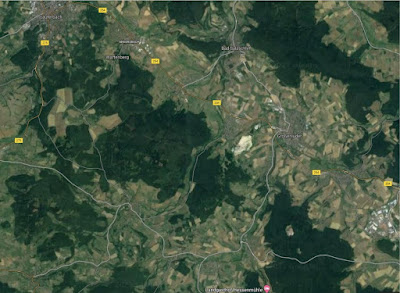 Here you can see the major highway (254) that sketches out the general line of control of the Soviet 11th GTD running from Lauterbach to Grossenluder.

Next up, I did a quick sketch of the situation as I understood it from the story.  According to the historical data the 11th GTD was comprised of three Tank regiments (7th, 40th and 44th TR) and one MRR (249th).  The author specified that the 1st Armor enveloped the the MRR south of Stockhausen.  Looking at the map, their is a large rise Southeast of Stockhausen where a stream cuts through the woods back towards Grossenluder.  I therefore assumed the Soviets would have three regiments forward and the most depleted regiment pulled back to maintain a reserve as well as cover the flank.  This resulted in the following concept map: 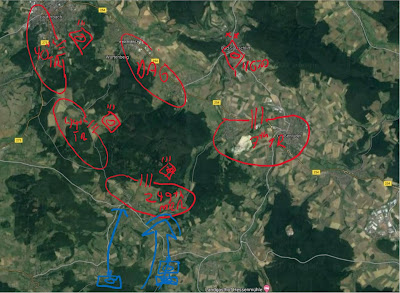 You you can see the Soviets deployed West of the highway where the terrain would be more advantageous.  The division HQ is focused back at Grossenluder with the Division Artillery Group (DAG) along the highway and the 7th TR pulled back to protect the southern approach and support the division if they attacked.
Next up I zoomed into the area around Stockhausen to focus on the actual battlefield. Their position would basically run from the town of Schadges  southeast toward the village of Kleinluder. 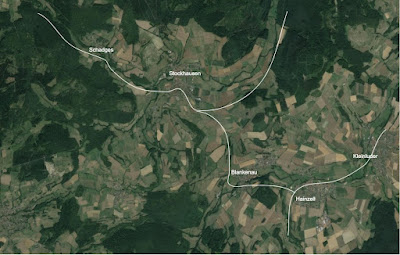 Taking a closer look at this terrain, it seemed the best defensive position would be a reverse slope defense of the valley to the East of Stockhausen proper.  A Soviet MRR from this time period would have 3x Battalions in BMPS (MRB), 1 over strength Tank Battalion plus attached AT, Recon and Artillery elements.  I opted to plot those on the map as well as put in some appropriate obstacles like tank ditches and mine fields to act as turning and blocking obstacles for the defense.  (I should add that I even dug out my old OPFOR warfighting guide from the Armor Center to make sure I was at least a little doctrinally correct) 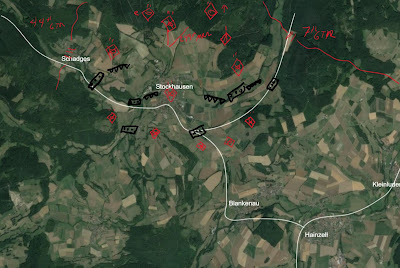 With the Soviets plotted, it was time to think about the problem from the American perspective.  During this time period, US Armor Brigades had two Armor and one Infantry Battalion comprised of  four companies each.  I assumed that units would be retasked to form combined arms "Task Forces"  Since the scenario concept stated the US Brigade enveloped the MRR, I decided the US Commander would be approaching from the South.  I put the two Armored Battalions online with the Infantry Battalion in a follow and assume mission behind the main effort.  The Brigade Cavalry would provide the initial screen and then move to guard the Brigade flank during the assault.  Putting it all together I had a concept map: 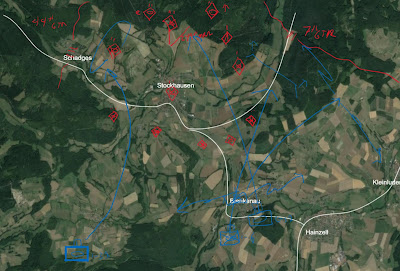 Next up the forces.

The Soviet Order of Battle was rather easy.  Mike (the author) told me he assumed they were sitting around 60% strength.  The write-up also indicated that 2 reserve tank battalions would perform the counterattack late in the battle.  Thus I came up with the following:

Elements of 1st GDs Tank Army, 11th Guards Tank Division
The American were slightly more complicated.  I initially misread the write-up and thought they were using 1st Brigade from the US 3rd Armored Division  (The one that was organic to V Corps in 1987)/  That brigade was equipped with M2 Bradleys.  1st BDE, 1st AD however, was still equipped with M113 APCs.  I also needed to complete the engineer Battalion as I needed something to address the Soviet obstacle belts.  That required an order to picoarmor and some painting to fill out the holes in my collection.

With the new models added I was able to build a suitable attacking force that would be able to dislodge the reinforced, yet depleted MRR:
American OOB

With miniatures settled and a concept of the operation determined for both sides, I built the terrain board. I opted to set this up on my sunken terrain board as I knew that summer plans would prevent this from being a quick project.  I focused on modeling the rise south of Stockhausen, and the 'rive' running north towards Grossenluder for the Soviet reinforcements. 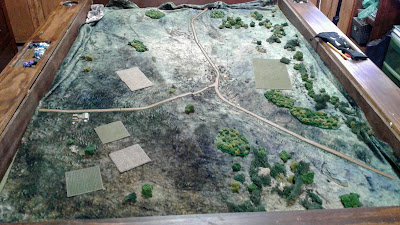 Wrapping this up for today, here is the initial disposition for the Soviet defense of the valley.  With my rule set only Scout units and BN HQs stands are placed on the table initially.  Combat units are placed with they are spotted during the recon phase of the game. 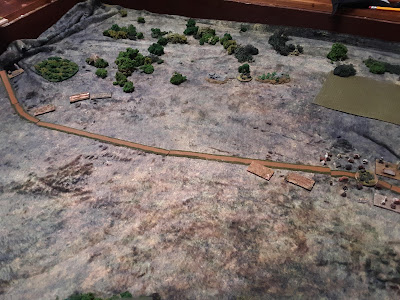 Thanks for enduring this far, now I need to finish writing up the conduct of the actual battle.
Battle report Cold War Modern US Army USSR