A host of additional irregular troops for my "post-Soviet transition phase project."  These miniatures represent both sides of the current conflict in the Donetsk region of Eastern Ukraine.  The minis are from SAS now "Footsore Modern" and include one squad from each side with a smattering of military a civilian kit.

The weapons are a mix of the AK family with what could be a few odd ARs thrown into the mix. I opted to use the same colors I did for the Chechnyan and Russian troops from Tiny Terrain Miniatures last year.

Some of the kit looks a little too recent, but I am planning to try some head swaps to get something that looks a little more appropriate for the 90's rather than ultra modern.  I have been playing around with the rules for Osprey's "Zona Alfa" and these models should fit in rather well with that as well. 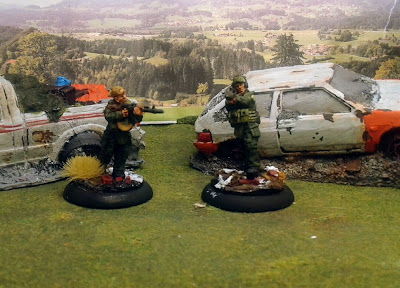 I am maintaining the winter motif with the group to make it something different from my other collections. 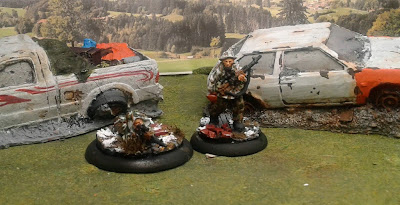 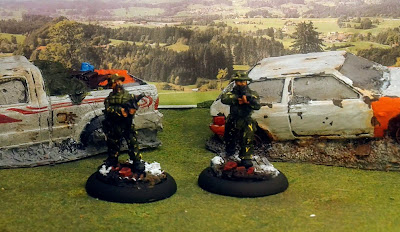 Speaking of Zona Alfa, here is my first converted mini.  This is just one of the Footsore figures with what looks like an AR w/Eotech reflex site.  I removed the baseball cap/ personal comms system head and used a 'post-apocalyptic'  female head from Brother Vinni.  Seems to work ok. 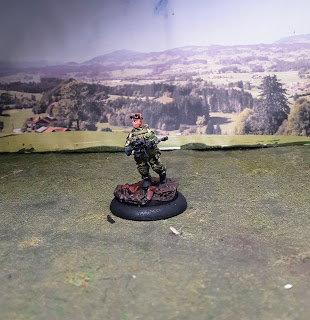 Overall a fairly healthy force for some skirmish games.  I now have a couple squads worth of Russian conscripts and Chechen fighters, these irregular troops and a full platoon of Soviet Infantry in full CBRN gear.  (Eurekas "Chemical Commies)  I just received a 3D printed BMP-1 that will allow me to field an appropriate mix of cold-war era vehicles for skirmish games ala 1975-2000. 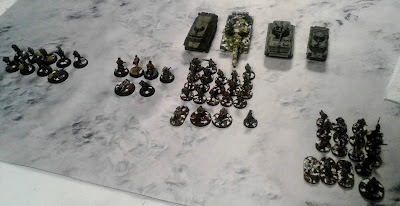 I just need to find a decent source for 28mm US Infantry in the 1980s.  I can't believe with all the cold-war gone hot games of late that no one has done this yet.
28mm Chechnya Cold War Footsore Miniatures Modern USSR Zona Alfa