Greetings from the apocalypse 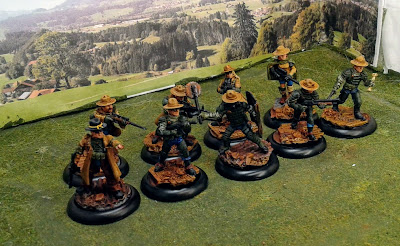 Going from Fantasy to Science Fiction, I have some "Peacekeepers" from Worlds End Publishing's "This is Not a Test"  I picked up the rules because they looked a little more workable than the Fallout rules and they had what I think is a better Campaign system.  The game looks fairly inspired by pulp Apocalypse stories of the 70's and 80's with some obvious inspirations from games like Fallout.  These guys look fairly 'inspired' by the NCR from fallout, so I opted to paint them up in similar colors. 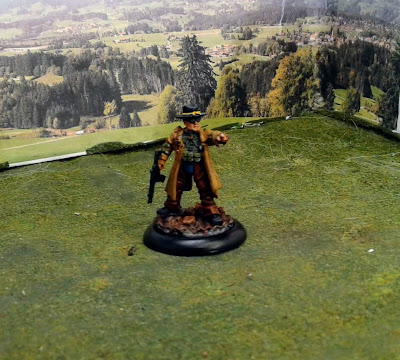 The leader was done with a black Stetson and yellow chord because obviously that makes  him superior to those with hats and berets.  He appears to be indicating to his troopers that those in the distance "ain't Cav" and should therefore feel the full weight of their wrath. 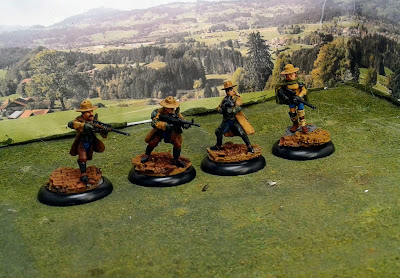 The troopers have a mix of weapons including ARs, a hunting rifle, sniper rifle, grenade launcher and shotgun. 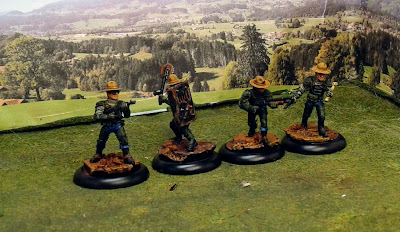 One guy is apparently a skirmisher armed with a police riot shield and a baton w/saw blade (because apocalypse) The last guy is carrying a large bone because he is apparently a dog handler, and that is what they use after the bombs fall. 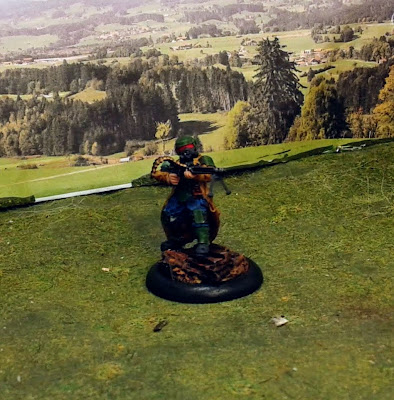 I opted to pick up a similar knock-off style mini from Brother Vinni to act as an NCR Ranger.  Who has apparently come across an ancient MG-42 from the rubble. 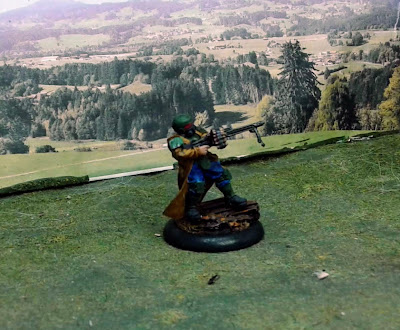 I like the dynamic pose for this model, with the ammo belt flapping in the air like he just hefted the thing.  The only downside is that the resin is fairly fragile and it is only a matter of time before it is lost to the mists of time.
I also added a few other 'survivors' the mix.  First up is TNT's mascot "Gas Mask Girl"  Apparently, all you need is respiratory protection and nothing for the eyes or skin.  Perhaps they are dealing with COVID 219? 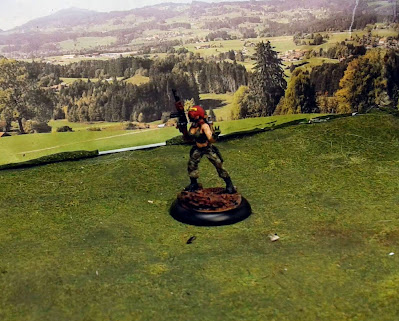 The original model came with a golfbag filled with weapons on her back, but I opted to swap it out with a rucksack from the bits box.
Lastly here are some "Postapoc Citizens" from Brother Vinni.  I painted these up as a group of vault dwellers from Fallout as well.  I wasn't quite as happy with the weapon selection so I opted to swap out an oversized assault rifle with a Thompson SMG and a .44 revolver with an RPG (why not?) . 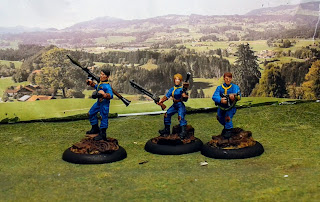 A lot of not history I know, but I like taking these asides. Besides it has been almost a year since I had an opponent over the age of 14, so you work with what you have.
28mm Fallout Science Fiction This is Not a Test