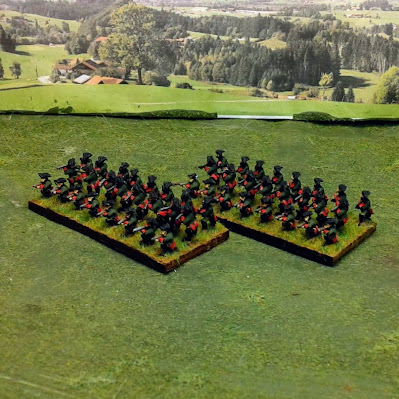 It's probably better not to think about the fact that it has been over a year since I added to my Seven Years War project.  Things were trucking along very smoothly by the summer of 2019, that I only had a pair of units left to complete the entire Prussian army.  Then things went a little awry.

But at last, things are back on track and the last two units are complete!  I give you the Feldjaeger zu Fuss (above) and the Freicorps Jaegers (below.)  I chose to doe the Feldjaegers as they were present at both Leuthen and Hochkirch (both battles I want to try some day) as well as serving in the War of Austrian Succession.  The Jaegers have a rather standard color scheme that will allow them represent several different regiments of the time period if I need a second regiment of light infantry.

I have only one more regiment of Austrian light infantry (Warasdiner-Kreutz Rgt) before I have all of the available figures done, and the intial planned project can finally be called complete.  I need only to base them at this point. Cheers all.