I for one welcome our future Robot overlords.

Yes it is another Fallout Wasteland Warfare update.  This time I bring you my selection of robots in the post apocalyptic retro future.   Once again, these are resin models with a high level of detail, matched to the models seen in the Fallout 4 video game.

The basic set provides you with two protectrons and three assaultron models.  This is a weird mix as the protectrons are for more ubiquitous in the game. These are lumbering bots very reminiscent of Robby the Robot of lost in space fame.  I opted to paint one up as the standard green model, and the other on the police scheme.  (There are also construction, fire and paramedic models, but there are no modification parts to represent them) 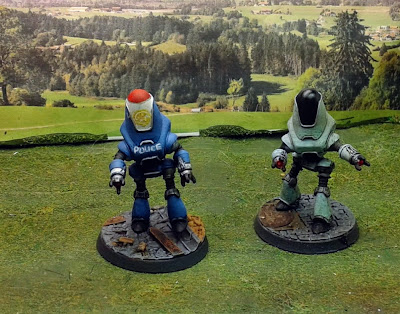 The assaultrons are the military models that are usually terrifyingly fast in the game with slashing claws/blades and a death beam mounted in their helmets.  I wen with an dark army green paint schemes and some 1/285 scale micro armor decals for the white stars and "US" logo on the chest. 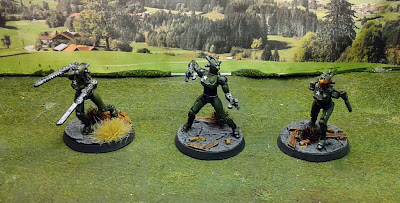 Lastly I have this Sentry Bot as the weighty bruiser of the group. He has a minigun on one arm and rocket launcher on the other. The added mortar on his back  allows him to provide some hefty fire support.  I used the same overall deep green and gunmetal scheme on him as I did with the Assualtrons above, with the addition of more rust effects around the feet and joints. 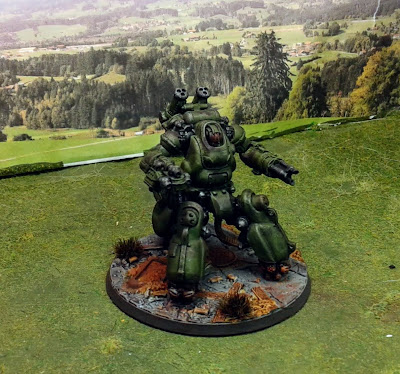 The most notable part of this kit is that it is the only one so far that actually provided a weapon option!  You can choose to equip one hand with either the rocket launcher or another minigun.  For me this really high lights the biggest flaw with this entire collection:  There are no customization options and the models themselves are not kit-bash friendly.  There are rules in the game, for example, to allow you to mix and match robotic components to customize your force.  Too bad there is no way to represent these changes with your models. 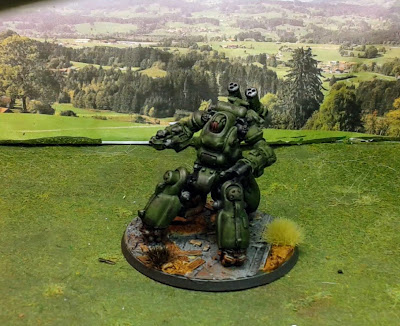 Really, given the small model count, customization heavy rules of the game it is bizarre to me that the models are so static.  I have all these options to customize armor, weapons, and equipment, but no way to reflect it.  Want to equip your Brotherhood of Steel guy with an Assault Rifle?  Go for it!  Just remember that all of the available castings have laser rifles, and the new weapons sprue does not include assault rifles.  I have managed to purchase most of these models at some rather steep discounts, but even then it seems on the high side of what I want to pay for the quality of the production.  I have been playing around with the rules for this one, but I need to convince my son to give them a try and compare them against "This is Not a Test" to assess which is best.   More to follow I suppose!