One of the byproducts of my odd painting tangents this summer was greater experimentation with weathering effects.  Between picking up the Fallout: Wasteland Warfare boxed set and my Chechnya project, I saw a need for making things look a bit more worn out.  My first attempt was at making some of my 28mm Cold War era vehicles look a little more worn.  I started with the BTR-60PB as it had the least amount of camouflage netting and snow effects to work around.

The first item was using VJ Chocolate-Brown to add some paint chips.  I focused on the areas where it would be mot common.  (Having crawled on enough armored vehicles on my life, I had some experience to fall back on.).  Next up, I used Citadel "Typhus Corrosion" to pick out areas I wanted rust.  This is a great little effects paint, as it has some rough texture that works well to mimic corrosive effects on iron.  Following that I was able to use some of my VJ rust effects pigments to add some tinges of Iron Oxide all around the model.

I went rather heavy on pieces like the engine exhausts along the back. More difficult to see in the pictures are the liquid rust effects I added to make it look like the streaking you get from water run-off.

Following the vehicle experiments it was time to start playing with terrain.  I opted to use the piles of plastic wall tiles I have from the 1st edition GW Necromunda boxed set.  I started with a base spray coating of 'beaten bronze' and then started building up using a selection of weathering powders and VJ rust wash.    I went back over several times as I found some of the lighter powder tones tended to overwhelm the rusting pattern. 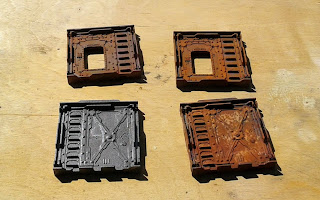 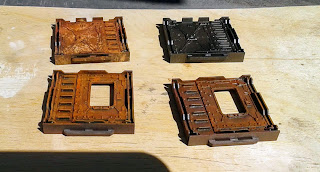 Lastly I started playing around with some 3d printed terrain pieces I picked up from Miniature market and Etsy.  This ranges from small piles of barrels to the massive storage tank shown below. 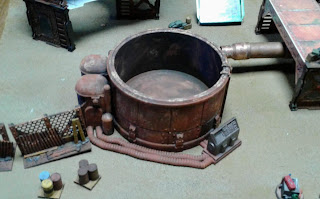 The fencing shown in the picture was an experiment using brass tubing and some old wire sorting baskets from my old home office set. 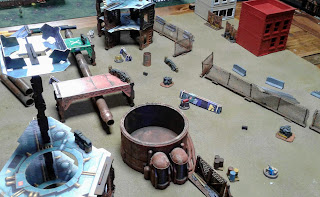 Overall, it doesn't look too bad and helps sell that 'run down' look one would expect from WWIII/post Soviet collapse/post apocalypse game board. 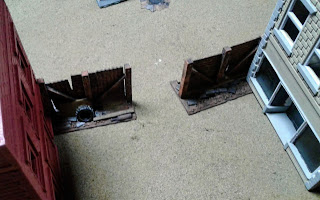