Crawl out through the fallout....

September 18, 2020
And now for something completely different......
Back when the pandemic kicked off, I pre-ordered a bundle of Skyrim minis/rules from Modiphius.  That order kept getting postponed, so I decided to try the other Bethesda licensed game they produce:  Fallout Wasteland Warfare.  This is a post apocalyptic skirmish game set in the Fallout 'retro-future' setting.  Basically a world where design and attitudes were frozen in the mid 50's and advanced with nuclear powered cars, ray-guns and atom bombs.  I really quite enjoyed Fallout 4 mostly because its design aesthetic and  dark scifi undertones.   As for the game:  It is a fairly crunchy ruleset with a steep learning curve.
Each model is represented by a card with statistics + other smaller cards representing their weapons, equipment and even modifications to said equipment.  This takes a lot of real estate on the table, so you end up needing a 6'x4' table for your 4' square battlefield.  In addition, all stats and abilities are represented symbolically.  It does make it easier once you learn all the symbols, but again, a steep learning curve.  (Especially for those of us who flit between rules systems)  The game uses a special d20 that is modified by different types of dice depending on effects.   Similar to their Skyrim game, but with D12s instead of d6s.
Movement and weapon ranges are defined by differently colored cardboard sticks, that I felt compelled to replace with a wooden facsimile right off the bat:
The miniatures are actually quite nice.  The boxed set comes with pvc plastic style minis based on the artwork for Fallout 4.  This includes scenic bases which really help the models 'pop.'  You basically get a set of 'good guys' in gray and baddies in green plastic.  This includes a female Sole Survivor (the protagonist from the game) with her dog "Dogmeat".  There are three other survivors including a bare-chested fellow who also works as a tech for the super-mutants.
As for the super mutants, I quite enjoyed painting these guys.  It was my first attempt at adding rust effects to individual models rather than just to terrain pieces.  The are basically retro-tech ogres with their own mutated demon dogs: 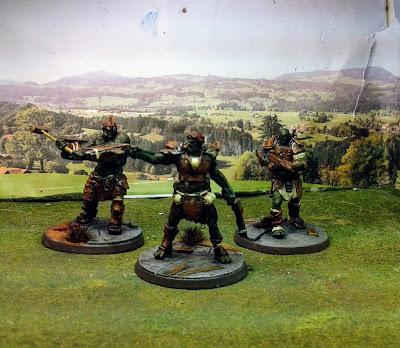 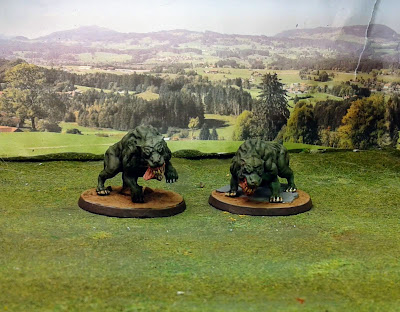 Finally , the set comes with a giant 'Deathclaw" and a 50's style nasty alien invader.

I am still not sure how much I effort I want to throw into the rule system.  I painted up several of the resin sets as I like the subject matter, but I also grabbed  a copy of "This is Not a test" to compare.  This is supposed to be for quick skirmish games, and I want to find something my opponent might want to spend time learning as well.
32mm Fallout Modiphius Science Fiction Skirmish