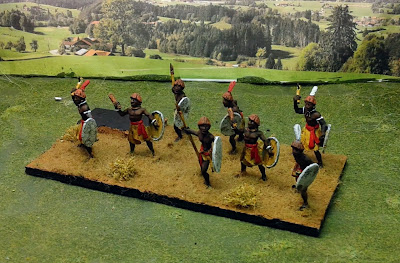 More units for the Kushite Army!

I picked up a pack of Kushite warriors from the Warlord "Hail Caesar" line. They are a little underdressed for the Kushite controlled Egyptian army of the time, but I thought they would work well as some Tribal Auxilia/Allies for the army.  (I was inspired by an Osprey painting showing a Kushite in typical Egyptian attire negotiating with a Tribal chieftain.) 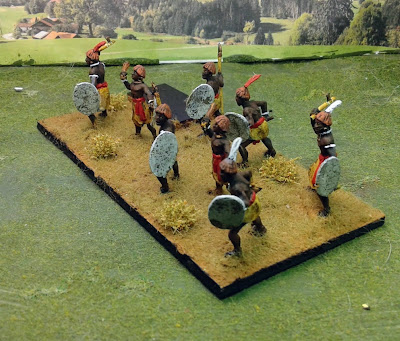 There were only eight figures in the pack, so I put them on a 60mm base in an open order formation.  I used an old tooth brush to speckle on the brown paint to give the shields a natural hide appearance.


Just the one unit of tribal infantry at this time.  I may add some more if the mood takes me.  For now, I am close to finishing all of the available Egyptians on the lead pile this month!
28mm Ancients Egyptian Warlord Games